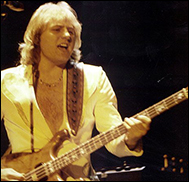 (CelebrityAccess) — Greg Lake, singer, guitarist and co-founder influential progressive rock groups King Crimson and Emerson, Lake and Palmer died Dec. 7th. He was 69 at the time of his passing.

His manager, Stewart Young, announced Lake's passing, writing: "Yesterday, December 7th, I lost my best friend to a long and stubborn battle with cancer. Greg Lake will stay in my heart for ever, as he has always been. HIs family would be grateful for privacy during this time of grief."

Band-mate Carl Palmer added, "It is with great sadness that I must now say goodbye to my friend and fellow band-mate Greg Lake. Greg's soaring voice and skill as a musician will be remembered by all who knew his music and recordings he made with ELP and King Crimson. I have fond memories of those great years we had in the 1970s and many memorable shows we performed together.

"Having lost Keith this year as well has made this particularly hard for all of us As Greg sand at the end of Pictures At An Exhibition, "death is life." His music can now live forever in the hearts of all who lived him."

Lake joined the group that would become King Crimson in 1968 and he performed lead vocals and bass guitar on their debut album "In The Court of the Crimson King" and its followup "In The Wake Of Poseidon" but departed the group to help found ELP in 1970 with Keith Emerson and Carl Palmer.

The group would go on to record six platinum-selling albums, each infused with classical influences and baroque imagery with long-form songs that seemed almost a direct challenge to commercial radio.

However, as punk eclipsed progressive rock in the public space, ELP's star waned and the group parted ways in 1979.

Lake would go on to a solo career and would continue to collaborate with other artists, including stints with Asia, and the short-lived Emerson, Lake & Powell.

Lake rejoined ELP for reunions in the mid-1990s and then for a one-off anniversary show in 2010.

He is survived by his wife, Regina, and a daughter, Natasha. – Staff Writers