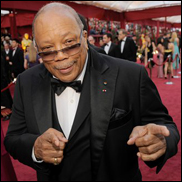 LOS ANGELES (CelebrityAccess) — Veteran music exec Quincy Jones, who produced some of pop icon Michael Jackson's best-known hits, including "Bad" and "Thriller," has won a lawsuit over royalties against the late King of Pop's estate.

The lawsuit, brought against MJJ Productions Inc., alleged breach of contract and said that Jones was owed $30 million in payments. The lawsuit centered on allegations that MJJ Productions Inc., which is controlled by Michael Jackson's estate, failed to pay Jones royalties for the soundtrack to "This Is It," a documentary that was released just months after Michael Jackson's death, and Jackson's Cirque du Soleil productions, which both feature several musical hits produced by Jones.

On Wednesday, a Los Angeles jury awarded Jones $9.4 million after finding that the producer had been underpaid royalties for the use of music in the film and the two Cirque productions.

In a statement following the verdict, Jones said:

"I, along with the team I assembled with Michael, took great care and purpose in creating these albums, and it has always given me a great sense of pride and comfort that three decades after they were originally recorded, these songs are still being played in every corner of the world.

"This lawsuit was never about Michael, it was about protecting the integrity of the work we all did in the recording studio and the legacy of what we created. Although this judgment is not the full amount that I was seeking, I am very grateful that the jury decided in our favor in this matter. I view it not only as a victory for myself personally but for artists’ rights overall."

In a statement to Billboard following the verdict, Howard Weitzman, a lawyer for the Jackson Estate said, "Quincy Jones is not Michael's partner and he’s not our partner. Even though he was awarded $20 million less than what he asked for it’s still a large amount of money and it’s kind of unfortunate. This jury was put into the position of interpreting and kind of rewriting the agreements, which is very unusual and normally they are not given that kind of responsibility."