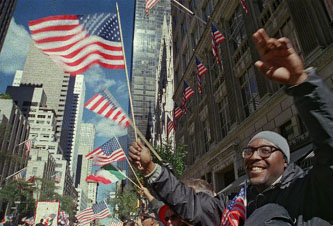 If all goes according to Carolyn Baker's plan, every radio station in America, at the stroke of midnight, on July 4, will simultaneously play Ray Charles' now-famed rendition of "America The Beautiful," which has become a concert staple at his shows; Quincy Jones arranged the music. Baker is president of Crossover Records, Charles' record company.

When "America The Beautiful" was first released in 1972 as a single, it was a slow seller.

In 1976, Charles' version got an unexpected reprise when it was used at the Winter Olympics to accompany the U.S. ice skaters.

A re-release of the song sent it soaring on the charts.

Since then, Charles has sung it over and over at hundreds of performances yearly, always by popular demand.

It's one of his most requested songs, first introduced into his stage show at Carnegie Hall with the unfurling of a giant American flag.

He's sung it at both the World Series and the Super Bowl.

Asked about his interpretation, Charles has said: "I put a little country backbeat on it and turned it my way."