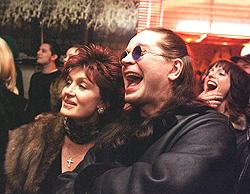 You won't want to miss this. Be sure to tune in to MTV's new weekly TV-verite show on March 5 at 10:30pm ET/PT, as the situation reality program follows the real-life drama of rock-n-roll's first family, the Osbournes – Ozzy, wife/manager Sharon and two of their three teenage kids, Kelly (16) and Jack (15) – as they deal with everyday life in southern California. Family members will tackle typical familial issues such as school, allowance, moving, pets, tattoos, adolescence, and life on the road.

"MTV has a tradition of creating innovative television forms and 'The Osbournes' continues this tradition by showcasing musical talent in unexpected ways and breaking the reality and sitcom genre molds,'' said Brian Graden, president of entertainment, MTV. "The Osbournes" is also an excellent example of how MTV is presenting three dimensional images of artists and musicians, giving our audience a multi-layered look at the stars they love.''

Some of the family dramas center around Ozzy and Sharon's disappointment with Kelly's new tattoo, when Ozzy learns how to use the remote control and when the family cat is lost, among other "typical" family events.

Ozzy and family gave MTV nearly unlimited access into their personal and professional lives throughout the taping, following the family 24/7 almost six months to record and capture the family's daily lives.