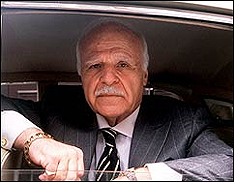 LOS ANGELES (CelebrityAccess MediaWire) — Don Arden, a rock music entrepreneur and one of the most prominent figures in pop during the 1960s and ‘70s, has died at the age of 81.

Arden, the father of Sharon Osbourne, managed the careers of Electric Light Orchestra, the Small Faces, Gene Vincent, and, later, Ozzy Osbourne. A fight over career control with Sharon after she married Osbourne, led to a longtime estrangement with his daughter, ending in 2002 after his dianosis with Alzheimer’s disease.

Arden was infamous for a brash and physical approach to protecting his artists and business, and reveled in his tough reputation, wearing wide-lapelled, gangster-style suits and becoming known variously as “the Al Capone of Pop,” “Mr. Big” and “the English Godfather.” He reportedly once was involved in dangling competing manager Robert Stigwood from the balcony of his office by his ankles for attempting to lure away one of his acts, the Small Faces.

“Try to steal my discovery – that was unforgivable,” Arden wrote in his 2002 autobiography, Mr. Big, according to the BBC.

“Yes, I threatened to throw Robert Stigwood off the balcony of his office. But no, I didn’t personally hang him by his boots.

“I wouldn’t have dirtied my hands on them.”

Born Harry Levy in Manchester in 1929, Arden got his start in the entertainment industry as a singer and comedian, before moving into management. After marrying Hope Shaw in 1950, he pursued a more stable income by arranging tours for US acts like Gene Vincent and Little Richard. Despite managing some of the biggest acts of the 1960s and 1970s, he struggled with managing money and swung between riches and poverty for much of his life.