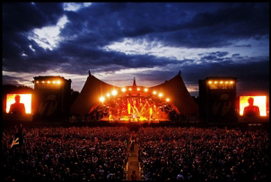 ROSKILDE, Denmark (VIP NEWS) — Roskilde Festival Charity Society has reported a record-breaking profit of 2.7 million euro after the festival in 2009, and the participating societies have earned 2.1 million euro on trade and services.


The total sum is 4.8 million euro that is now distributed to charity, benefitting especially youth and children.


The accounts for Roskilde Festival 2009 are now finalized and shows an overall profit of 2.7 million euro, which is the best economic result in the festival's 39-year-old existence.


The profits are now to be distributed to charitable and cultural projects in accordance with the society’s objects clause.


Great weather sold more tickets
Roskilde Festival 2009 was not sold out, and especially audiences from abroad stayed at home last year. But a fantastic weather in the days before and during the festival as well as a strong music program with names such as Coldplay, Oasis and Kanye West at the top of the poster gave a further boost in ticket sales at the last minute.

Through the years, Roskilde Festival Charity Society has donated more than 18.1 million euro to charity.

Also, the many societies and organizations, that carry out trade and service jobs at the festival site, can look back on a lucrative 2009. In all, the societies recorded a total profit of 2.1 million euro after Roskilde '09. Especially the hot weather throughout the festival week boosted the sale in the stalls.