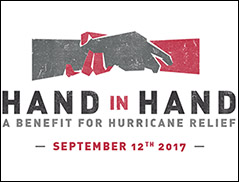 The "Hand in Hand: A Benefit for Hurricane Harvey Relief" telethon will simulcast on all of the major networks on Sept 12th, with broadcasts based in Los Angeles at the Universal Studios lot, and will include stages in Times Square, and the Grand Ole Opry in Nashville.

As well, Texas native George Strait will also appear from his own benefit concert in at the Majestic Theatre in San Antonio.

Artists lined up for performances or appearances on the telethon include Beyoncé, Justin Bieber, Black Eyed Peas, Bun B, Blake Shelton, Jamie Foxx, Drake, Julia Roberts, George Clooney and others.

Organizers said they would also include victims of the encroaching Atlantic Hurricane Irma, which is threatening landfall near Florida later this week.

Donations will be accepted by phone, text and online beginning with the start of the show and ending an hour after the show's conclusion.

Proceeds from the telethon will go to benefit a number of aid organizations, including the Red Cross, United Way, Habitat For Humanity, Feeding Texas and Direct Relief, as well as the Mayor's Fund For Hurricane Harvey Relief.

The fundraising effort comes after Harvey, a Category 4 hurricane when it made landfall, inflicted widespread flooding and destruction on the Gulf Coast of Texas and Lousiana, with damages that could exceed $100 billion.