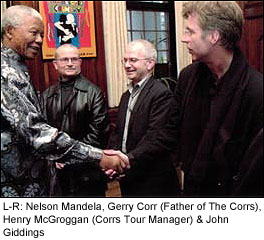 As long speculated, SFX has acquired John Giddings' Solo, one of the UK's leading booking agency and concert promotion companies. All Solo principals will remain in their current roles, with the operation reporting into SFX Europe's Music Group, headed by Miles Wilkin.

"SFX's vision for Europe is to create a footprint that parallels our North American success," said Brian Becker, SFX chairman/CEO. "In order to achieve this goal, we are identifying top companies, like Solo, that not only will grow our business globally but that complement the SFX and Clear Channel assets already in place. John Giddings and his staff at Solo have been tremendous business partners to SFX for many years now, and it is nice to have them 'officially' join the SFX team."

"I have worked closely for years with SFX's global touring executives, including Arthur Fogel in Canada, and it makes sense to fully integrate Solo with the company's European expansion programme," said Giddings. "The touring business has finally grown up in the 21st century, and I'm looking forward to being part of a brave new world."

In the past eight months, SFX has acquired Make-It-Happen and Herman Scheureman's companies in Belgium, ITB in the UK, and forged an alliance with EPM Media AG in Germany.