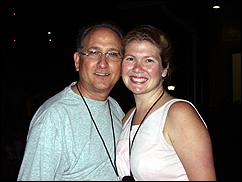 ATLANTA (CelebrityAccess MediaWire) — The music will go on this summer in Atlanta, despite a one year hiatus by Music Midtown and the end of Mad Booking's On The Bricks, thanks to the return of producer Marcie Allen Cardwell to the Atlanta festival scene, and the one-day Star Fest.

The event, sponsored by radio station Star 94, is expected to be an annual event, which took advantage of the lack of a citywide festival this summer as its launching pad. Cardwell previously organized the free On The Bricks concert series.

"Star 94 General Manager Mark Kanov came up with the idea," Cardwell told CelebrityAccess. "He and I realized that with On The Bricks and Music Midtown gone this year, there was a huge void to be filled in the city."

The two-stage outdoor festival, to be held in the shopping and entertainment center Atlantic Station on Saturday, July 22nd, will feature the sounds of Train, Nickel Creek, Pink, Aqualung, Mat Kearney and The Whigs. Several local Atlanta groups will also be announced in the coming weeks.

"Atlantic Station is a natural place to bring music to in Atlanta," said Cardwell, describing the new downtown location. "It's only two blocks from the train, and everyone knows how bad traffic is in this city. It saves people from having to go way out in the suburbs to see a concert.

"A lot of music fans are sick of going to amphitheaters. Many are looking for, what I call, non-traditional venues," she explains. "Atlantic Station's central location and huge property is perfect for this sort of event. Music fans have spoken and promoters are starting to listen."

Cardwell’s new company, MAC Presents, has been more instrumental in booking corporate events than music festivals, a departure from her role with Mad Booking. On The Bricks remained with Mad’s Laura Valente after Cardwell left the company.

"It's very exciting to be back doing something like this in Atlanta," says Cardwell. "I'm very excited about Star Fest, and how it will grow in the future."