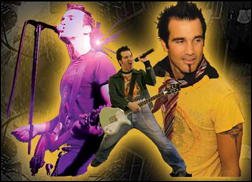 NEW YORK (Hypebot) – Times are tough for rock cover bands. The Wall Street Journal takes a look at their plight and finds that interest is dwindling for bands playing music that used to be popular. While closer industry watchers may take a different view, I saw indie rock killing cover bands in the 80s when the indie stance of originality entered the Top 40. Rock moved on. Cover bands did not. And to make matters worse, even the core baby boomer audience seems to be losing interest.

Neil Shah writes a rather empathetic piece for WSJ. I appreciate that. It's far too easy to make fun of cover band artists who have to scrounge to earn a living.

"If you said Steve Brown would be wearing Spandex pants, playing a hot-pink and green guitar and doing Michael Jackson and Madonna songs three years ago, I would have said, 'No friggin' way'…My career has kind of gone backwards."

Sterling Howard of Musician's Contact maintains that "Top-40 cover-band gigs have declined 80% in the past 15 years."

But should this be a surprise?

While not all of the artists mentioned in the article are baby boomers, this is baby boomer stuff. These kind of rock cover bands rose with the baby boomers and the folks that I know who still think there's no topping what they listened to back in the day (in this case a bunch of nice 40+ white people) just don't go out as much. And they're much less likely to seek out a cover band than they are to either go see a big stage act or check out local musicians who do a mix of originals and covers.

But it's not the cover song that's dying. We all know that's alive, well and introducing artists to larger and larger audiences via YouTube. And because of services like YouTube and Spotify, it's easy to find the original music from Bad Company or Van Halen.

I think the shift in the 80s to indie rock also changed the game for cover bands. It brought a deeper interest in originality to rock music and really moved it further away from the repertory approach that we saw when bands like The Rolling Stones played blues classics or The Grateful Dead riffed their way through the American Songbook. Of course, those bands were doing their own versions of songs while cover bands try to emulate the original act.

While I was going to see bands like Bad Brains, COC and Jane's Addiction at little clubs in Raleigh, NC, lots of folks were still checking out cover bands at places I mostly avoided. But it was in the 80s when I really noticed the next generation turning their noses up at cover bands as were more and more of my tail end baby boomer peers.

Based on the WSJ article, the cover band scene has actually held up much more strongly than I realized, but every game eventually changes.