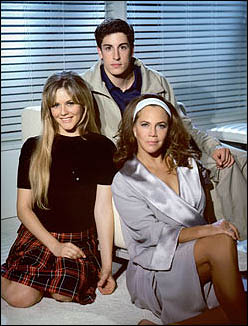 When "The Graduate" opened at the Plymouth Theater on April 4, it had an advance sale of $5 million, a Broadway record for a straight play. Starring Kathleen Turner, Jason Biggs and Alicia Silvertone, the Broadway remake of the 1967 Mike Nichols film, also set box office records in out of town tryouts in Toronto, Baltimore and Boston. Part of the show's appeal is Turner's 15-second nude scene. Nicole Kidman replaced Turner in the London presentation followed by Jerry Hall.

The previous Broadway pre-opening box office record for a nonmusical was "Amy's View" at $4 million in 1999 with Judy Dench and "The Blue Room" at $4 million in 1998 with Nicole Kidman. In 2000, "The Iceman Cometh" with Kevin Spacey opened with a presale of $3 million.