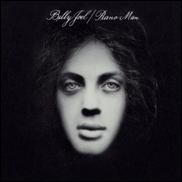 
I wasn't a Billy Joel fan. Sure, I heard "Piano Man" emanate from the single speaker of the '63 Chevy my dad bought in '73 that was passed down through his children in their last years of college.


But then the hits dried up, until the aforementioned "Just The Way You Are."


And then he put out a follow-up album, standing in the street with a horn…everybody knew he was a piano player, huh?


But then my girlfriend's parents were imploring her to move back to Florida and she identified with "My Life," and I bought "Glass Houses" so we could hear it.


And then "Songs In The Attic."

This was after we'd broken up. Do you know how lonely it is to disconnect after living together, to be inside four new walls and have them closing in? Your only hope is a record, a new one, one you never played together.


"I've seen the lights go down on Broadway"

That was the opener. Of both "Songs In The Attic" and the show.


That's the east coast for you, easterners get defensive, they want to argue it out, everybody in California is…mellow.

And Billy didn't play my favorite cut on "Songs In The Attic," "Summer, Highland Falls," nor the exquisite, western-influenced "Ballad of Billy the Kid," nor the strangely affecting "Streetlife Serenader"…


But after becoming a fan of these songs I went back and bought the catalog, to hear the originals. And I came to love "Turnstiles," which featured not only the original "Miami 2017" and "Summer, Highland Falls," but "New York State of Mind."


It's wistful, you've only got to hear the intro and you're taken back, assuming you were there to begin with.


And let me tell you what I hate about the east coast…the way everybody's in your business, the way fortysomethings quote their SAT scores, the belief that anybody who lives anywhere else is a pussy.


But I don't hate the cold weather, and I love the fall, it's where I grew up and some part of me will always be there, in a perfect world I'd still live there…at least part of the time.


Because the people are different. They've all got a lot to say. They like to argue. Being overweight is not a crime.


And they've got pizza the rest of the country can't comprehend.


And you can drive just a few miles and be somewhere completely different.


And clams come with bellies and the snow on Mt. Washington is as dramatic as the precipitation on the Rockies.


Which is to say that you can't really get Billy Joel in Los Angeles.


But he did his best to convince us.


By being everything he's not supposed to be.

You're supposed to dye the hair you've got left, diet down to nothing, look twenty or thirty years younger than your audience.


But Billy's had his hips replaced, he doesn't walk great, but he sure can play, he brings us right back, to who we once were and can never forget.


This is not an oldies act delivering a jukebox musical of its hits, thrilling those who were not in attendance when the records first climbed the chart.


No, young 'uns were absent, this was purely a baby boomer affair. We wanted to hear about Brenda and Eddie, the popular steadies… We kept the faith, we know who Frankie Valli is. We know the album cuts because we bought those LPs and played them.


So Billy comes out and does stuff that's not obscure, but never hit the radio.


And in between he's telling us stories, making jokes, playing riffs. It's as if your best friend came over and tickled the ivories on your mother's baby grand.


Because that's what music used to be…music, first and foremost. Getting rich was a byproduct, stardom came after the fact. Now we've got it backward, people want to be famous first, they don't really care how, whether someone else writes the songs, whether the background is fake…


Billy flubbed some lyrics. And owned it. Said the show was not on tape.


And it certainly was not.


But as great as it was hearing all of his hits, the absolute highlight was his rendition of "A Hard Day's Night."


John Lennon is dead, we're never going to hear him sing again. Paul does a great Beatles show, but he sings his songs. There's a giant hole where we know the records but never hear the performances…


Fifty years ago the Beatles appeared on Ed Sullivan.

But in August of '64, the fiftieth anniversary of which is only months away, came a movie that changed people's lives, the one and only "A Hard Day's Night."


And the thing is…you won't understand if you weren't there.


How Beatlemania erupted. How kids took the reins of this country from their parents. The sheer joy of playing those records until they were embedded in our brains.


And Billy was one of those kids.


He took piano lessons before, he was playing classical music, but when the Beatles hit…it changed everything.


I took piano lessons. When the Beatles arrived, I switched to the guitar, everybody played the guitar.


And that was a feature of our lives, sitting in living rooms, around campfires, singing Beatle songs…


"It's been a hard day's night, and I've been working like a dog"


We're just about done, we're almost ready to retire. And Billy Joel writes no new songs, because he knows there's no audience for them.


Most of the audience is in bed at this time, their late night days are through… But they remember getting stoned, pulling all-nighters, tying one on, and there was always music in the background.


"But when I get home to you, I find the things that you do
Will make me feel all right"


That's music, it's the only thing that makes us baby boomers feel all right.


And there will always be new music. But there's only one classic rock, we lived through the Renaissance.

We didn't need no smartphones.


We were addicted to the radio, and we remember these Billy Joel songs wafting out forever.


A real rock star, who despite his less than perfect looks married the best-looking model in the business.


Someone who drank and crashed and screwed up and was imperfect just like us.


And tonight, tonight he said what the hell, we were going to party one more time.


He imitated Elton. He referenced "Mighty Joe Young." He seemed not to care a whit about being cool, which made him more so.


In other words, you had to be there.


And if you were…your whole life flashed through your brain, you bonded with this guy who was not playing a role, but just being himself, comfortable in his skin after all these years.


Yes, it's still rock and roll to me.


And if you want to see a show that's alive, not calcified…GO!