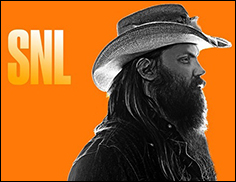 
He doesn't look into the camera. It's like he's in a honky tonk, another night on the endless road wherein he's downed a bunch of beers and is entertaining the assembled multitude, who are there to imbibe and check out the opposite sex (and the same one too!) This is not SNL, but something blasted in from a prior generation, when the music was paramount and image was secondary, when carrying a few extra pounds was not anathema, when how you played was a demonstration of your expertise and value, not how many likes and views you'd accumulated. This hearkens back to an era so long gone that I don't think anybody watching the show understood what they were seeing, but they GOT IT!

Welcome to the Chris Stapleton hype, wherein credibility's been pushed out front to the point where a few have checked him out. It's not a viral enterprise, certainly not outside Tennessee, he's been gently pushed down the throat of those who might care, but when you check out his album "Traveller" you're flummoxed, this is not Bonnie Raitt's "Nick Of Time," not a nineties Grammy winner that you put on the turntable and immediately get. "Traveller" is subtle and dare I say it…at first not great. It's good. But today that's not good enough, when we're surrounded by the history of recorded music. And then you let it play and the album takes a left turn, just when you feel superior to the critics you become riveted, the deeper you go the more passion and desperation that is evidenced, and you're closed.


The tour-de-force is the last track, "Sometimes I Cry," which is closer to the blues breakers of the U.K. sixties than anything coming out of Nashville today. It's slow and meaningful and when Stapleton exclaims that sometimes he cries, you're stopped in your tracks, not by some nitwit melismaing, but a guy with talent and experience who's expressing true emotion, true pain. It's a slow and dreary number, like one a.m. after too much Jack Daniel's, when you believe your world will never work out, and rather than get up your gumption to go on, you wallow in the mess you've made of your life, believing there's no way out.

But the best track on the LP is number 11, "Was It 26," which is as dark as Alice In Chains' "Rooster," but wiggles through the swamp like a bayou snake. There are changes and a sound that immediately enraptures you.


"Livin' hard was easy when I was young and bulletproof
I had no chains to bind me, just a guitar and a roof
Emptied every bottle, when I poured I never missed
I had bloodshot eyes at twenty five, or was it twenty six"


It was twenty eight for me. Too much alcohol and too many dead ends, I'd stopped living with my girlfriend and was still searching for the best night of my life. And in case you've never tried this, you don't. Ever. But bad turns and dead ends, I've seen them. And to know someone else has too…


Actually, "Was It 26" is one of the two songs on "Traveller" that Stapleton didn't write, but he makes it his own.


More accessible is the coming to L.A. story "When The Stars Come Out." Can you get up off the couch and make a change, set yourself up for new opportunities, for happiness? Most people can't.


After "When The Stars Come Out" comes the dirge "Daddy Doesn't Pray Anymore," a quiet number that sounds just like its title. All this darkness, all this truth, is in the second half of this fourteen cut LP. It's like some exec said we can't scare 'em away, we've got to load 'em up with the easy stuff.


The album opens with the breezy "Traveller," which lightens your mood but does not stick to your bones. There's a cover of the classic "Tennessee Whiskey," which Chris did to such acclaim with Justin Timberlake on the CMAs. The jaunty "Parachute." And none of this stuff evidences the pain, never mind the quality, of what comes after. Like "The Devil Named Music." Which is too slow to lead with, but opens your heart and brain, takes you away from this complicated game we call life, the one with iPhones and constant communication, and puts you in the driver's seat with your personality intact, not the one you polish up for social media, where it's all nice all the time, assuming you want to get ahead. And after "The Devil Named Music" comes "Outlaw State Of Mind," another one of those English-styled blues numbers

filtered through a modern mentality. It's so dark the label must have been afraid to feature it. This is Skynyrd country, heavy and edgy, from guys you want to listen to but
you're not sure you want to hang with.


And that brings us back to "Nobody To Blame."


On wax, it's a cross between Merle Haggard and the Dead. A bouncy tale featuring some fine picking.


But then you see the iteration on SNL. It loses its popiness, it settles down into the groove, it waltzes as opposed to foxtrots, it's a hair slower and more meaningful.


Credit Stapleton's vocal… He starts off weak, for an instant you think he ain't got the pipes, but that's just a line, he's away from the mic, making sure he's picking the notes on his Jazzmaster correctly, but then you hear him exclaim that he's got nobody to blame and you can't believe this mellifluous vocal is emanating from this burly dude. People aren't supposed to sing this good, everybody's a fake, talent is something we used to experience before tech allowed average people to employ seamless recordings to get corporate endorsements.


And really, it's all about the picking on that Jazzmaster, I won't say it'll launch a zillion players, but it's truly inspirational, and it sounds so GOOD!


Kinda like the harmonica and the steel guitar. Is this truly live? You sure it's not on tape, like the usual SNL fare, like Ashlee Simpson?


But unlike the skits on the show, this performance is not now, tickling this week's memory banks, but is positively retro, positively what music once was, when it existed outside the mainstream, was the stuff that set our minds free that we couldn't get enough of. This is why we went to the show, to bask in the sound of people who were all about the playing as opposed to the mugging.

There's no buzz. Because the people who saw this show are not the target audience, they're the fly-by-night kids who believe it's all about documenting their present so they can become stars.


And Chris Stapleton is not demonstrating any starpower, not by the usual standards, his antics don't fill up TMZ and he's not demanding our love as he tells us how much better he is than us.

As a matter of fact, he's taking responsibility, he's telling us it's his fault.


And it is. Nobody's perfect, even Donald Trump, all the rich people who look down upon us, they put their pants on the same way, they just think if they evidence weakness they'll fold. But those who can reveal their warts, those are the ones we want to get close to, because they're human, just like us.


Nashville embraced this guy, because he played their game, wrote hits, and then veered from it, refused to be defined by what was but went in search of what felt right. And in a corporatized world where everybody's playing it safe that's a revelation.


And if you were bitten by the music bug of yore, you'll find this video a revelation.


And if you listen to the second half of "Traveller" you won't be able to stop.