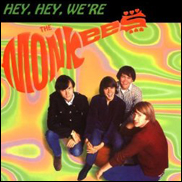 And I thought love was only true in fairy tales.


The legend of the Monkees is that they didn't write their own songs, they didn't play their own instruments, the whole think was fake.


The Monkees were the first indication that we'd won. That the old guard, the establishment, our parents, were no longer in control. We had our own sitcom on TV. Featuring our music. That was a gigantic breakthrough.


But what was even better was the music was great! In the case of "I'm A Believer", spectacular! Credit the songwriters, credit the delivery, but never forget it was a band, which came together through obtuse circumstances, like so many, but went on to not only create music, but stay together, even after their eponymous television show had been canceled.

And Micky Dolenz might have sung most of the songs.


But Davy was the front man, he was the cute one, he was the one the girls swooned for, the one we wanted to be.


Even better, he had a sense of humor about himself. He was funny back then, and knew he'd lived a charmed life until it all ended today.

There's not a baby boomer alive who does not know "(Theme From) The Monkees". This was not a Justin Bieber sideshow, the Monkees had more impact than Mr. Bieber or Lady Gaga. They were ubiquitous in a three network world where we were addicted to the radio when we weren't in front of the tube.


There are classic album openers, like "Gimmie Shelter" and "Back In The U.S.S.R.", and "(Theme From) The Monkees" is a member of this club. You're hooked from the initial drumbeat. And unlike modern hip-hop culture, the listener didn't feel excluded, put down by the group, but invited in.


But the hit was "Last Train To Clarksville". It played all fall until… "I'm A Believer" took over and owned the airwaves, through Christmas and beyond.


A magical track, "I'm A Believer" pivoted on Micky Dolenz's breathy vocals, but we didn't see it as a solo cut, but a masterpiece by the Monkees. It still puts a smile on my face today. I played it incessantly back then. I have never ever burned out on it. In a pre-Internet era where we didn't have our music on demand, you listened to the radio until they played your favorite song and then you went out and bought it.


I even bought the songbook, so I could play the songs at home, on my guitar. Not because I thought I was gonna be rich and famous, but because I wanted to share in the joy.

And I'm stunned how joyful I feel when I hear "Pleasant Valley Sunday" today. I'd given up at this point, as you often do. I bought the first three albums and then dropped out, but years later I realized I was wrong, this was a killer track.


But, once again, Davy did not sing the lead vocal.


But not only did Davy carry the hit "Daydream Believer", he sang "I Wanna Be Free", "This Just Doesn't Seem To Be My Day" and "Look Out (Here Comes Tomorrow)", which were as big as the hits to we who wore out these vinyl records.


I saw Davy twice in recent years. Once at the Pollstar Awards, where he demonstrated the aforementioned sense of humor about himself and last summer at the Greek, as part of the Monkees reunion.


At Pollstar, Davy talked about being a fading, aged rock star. The bills for college. He mocked his height, or lack thereof. And was essentially shilling for work, that's why you present at the Pollstar Awards.


At the Greek, the band played all the hits, we reveled in the memories. They showed video, we marveled over who we once were. It was thrilling, but shortly thereafter they broke up once again and the rest of the tour was canceled.


And that's the story of rock and roll, of being a fan. We want our bands to last forever. But they almost never do. The alchemy is so fragile. But the music remains. We put our faith in it. It keeps us going.


Such that when one of its purveyors passes to the other side, we're shocked. We thought they'd be here forever, with us, like the music. We looked up to them. If they're old and gray and pass away, what is to happen to us?


I don't know if Davy Jones went to the doctor. If he adhered to his prescription. In any event, he's now gone. He was a thread, however thin, to what once was, my formative years, I didn't have a bad memory about him. But if he goes, that means I'm next.


Yes, we baby boomers are heading into our sunset years. And as we're shuffled off the horizon, they want to rewrite our history.


Let it be said that we were mad about the Monkees. Their music stands the test of time. They were trailblazers. They were not hula-hoops, used briefly and then discarded with disdain, but a group of four men we embraced warmly. They let Jimi Hendrix open for them. They created one of the first psychedelic films. Hell, to get "Head" you've got to be high on drugs. It was co-written by Jack Nicholson before anyone knew who he was. Don't pigeonhole the Monkees as a trifle, as a mere footnote, as puppets. With their television show on the air it showed us not only that we had won, but the music was the decisive weapon in our battle. Soon bands like the Jefferson Airplane would be testing limits, we'd all gather at Woodstock and blow the mainstream's mind.


We owned the country. It was now ours.


Great songs, great performances… If that ain't the essence of music, I don't know what is.