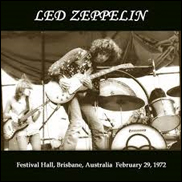 In my dreams, and they should be Jimmy Page's too.


I love the fact that Robert Plant refuses to go out, but there's a huge demand to hear Zeppelin's music, and Jimmy wants to play. He should go on the road with Pat.


The guy from Train.


Did you listen to his vocals on the Gregg Allman tribute album?


Deep and resonant, perfectly suited for Jimmy's work. Furthermore, Pat's got a history of singing Zeppelin stuff, does it in concert, most famously "Ramble On."


And the truth is even if Plant went out, he can't hit the notes. His voice has changed. And Queen keeps going out with different singers to huge demand.


But they call it Queen, and Freddie Mercury was the star.


But Jimmy Page was always as big as Robert Plant. Everybody knew it was Pagey's band.


Don't say you tried this once before, with the Black Crowes. Timing is everything, in music as it is in tech. And you were just too early.


But now, with Arnel Pineda successfully fronting Journey, and Pat Monahan already having a name, the audience is ready to be dazed and confused.

You want to play, you want to go on your victory lap.


Don't be afraid, you'll be embraced with open arms (sorry about the Journey pun…)


Jason pounds the skins nearly as well as his dad. John Paul Jones adds the texture. You…execute the riffs, bring out the bow and…


It'd be one thing if you said you were retired, that you had arthritis, that you didn't want to do this. But the truth is you do.


And the truth is everybody would be disappointed in a Zeppelin reunion, everybody would compare it to what once was. This… Would be a whole new thing, you'd get the benefit of the doubt, there would be love instead of negativity.


Furthermore, first time around sales would be incredible. You'd underplay just a bit, blow people away, and then everybody would come back, with their kids in tow. Come on, if Jason himself can play these songs to throngs, why can't you?