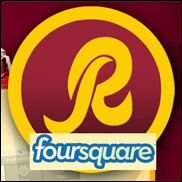 What kind of crazy fucked up world do we live in where an NFL team is hipper than any record label or concert promoter?

Whilst labels are shaking their fists at their customers and promoters are busy getting kickbacks from Ticketmaster, the Redskins are creating mania and building brand loyalty AND IT’S FUN!

Imagine a nationwide scavenger hunt. Hell, Trent Reznor did do this, depositing USB sticks in locations. But if the RIAA would stop whining and create a game where everybody got excited about music, wouldn’t it pay more dividends?

You’ve got to check in at the location of the Fillmore East. And the Boston Tea Party. And the truly adventurous will go to the Hacienda in Manchester. Fans would learn about music history as they earned their badges.

Go to Graceland and unlock an unreleased Elvis track.

See Lady GaGa in five different cities and she calls you.

Go to the House of Blues in five different cities and you get a call from Danny Aykroyd and Jim Belushi, today’s Blues Brothers.

You want to be the mayor of "Rolling Stone". You want to go to the disco where they shot "Saturday Night Fever". Make a pilgrimage to Kurt Cobain’s grave, as well as Jim Morrison’s.

Numerous hip-hop locations come into play too. The location where Biggie was gunned down, Tupac too.

And you qualify for ever greater prizes.

A bunch of Napster or Rhapsody subscriptions. Hell, you can only enjoy these subscription services if you use them. Music is already free, maybe by showing people the greatness of subscriptions, they’ll testify how satisfying they are.

And there will be a grand prize winner at a concert/TV show.

Make it a festival in New York or L.A. For a whole week. Fan Fair on steroids. Classic acts and wannabes, streamed on YouTube or sponsored by AOL or Microsoft or…

A week of club and arena shows.

And you can only get into the final gig by scoring high on the social network game.

And the winner gets an award. Goes up on stage and is laden with gifts… Free Live Nation shows for a year! A shopping spree on iTunes! A night with the rock star of your choice, sponsored by Craigslist… Well, we might have to stop shy of this.

This is a way for acts to give back, to gain promotion. Rather than appearing to a limited audience on "Entourage", what if U2 headlined this superbill at the Garden! And money can’t get you in, no way. Fat cats can only gain entrance if they play.

This is the opposite of today’s music business. Where money and power rule. Now, you can only get a seat if you’re a big fan.

And it’s all broadcast on TV.

Meanwhile, as the show goes on, you can play at home on your iPad/laptop/desktop. Yup, a competition will take place outside the venue with prizes just as good. And you can only win by watching.

Can you say FRENZY?

When is the music business gonna give up on the old model, selling discs, purveying overpriced albums with one good track, AmEx pre-sales and $100 tickets and utilize all the new media to make more money than ever before?

Stop complaining and get on the bandwagon.

Meanwhile, I originally found out about this promotion via Mashable on Twitter: