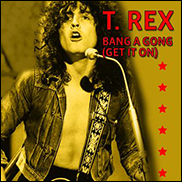 I've been meaning to write about "Bang a Gong (Get It On)," which I've heard on Sirius twice in the last two weeks, and the deejay on Deep Tracks said he was gonna play some T. Rex, but he started out with some Klaatu, and I pushed the button to Top Tracks and heard this.


People forget that "Led Zeppelin III" was a dud. History has been rewritten, its experimentation and acoustic elements have been trumpeted. But the truth is after "II" it was a disappointment, the band had hit the mainstream, they were superstars, and then not only did they veer from the track, they didn't deliver upon their own expectations.

It started off with the two-headed punch of "Black Dog" and "Rock and Roll," assaulting the listener with something to prove, the band illustrated that not only was it back but there were no contenders.


And then came "Battle of Evermore," my personal favorite, with the vocal abrasions of one Sandy Denny, delivering on the promise of "III," this is what they meant to do.


And side two featured the introspective "Going to California," which immediately grabbed you and made you think of the Golden State, and "When the Levee Breaks," the heaviest track ever recorded and…


Right smack dab in the middle was "Stairway to Heaven."


The cognoscenti had abandoned the band. They felt Jimmy and the crew had steered too far from their blues roots.


But the hoi polloi embraced "IV" because of the radio airplay. They didn't need no stinkin' rock magazine to tell them what to listen to, they knew excellence when they heard it.

And after the opening rockers, what they heard on the airwaves was "Stairway to Heaven." Over and over again. Back when rock ruled the world they had the top 500, the inspiration being the Indianapolis car race, and "Stairway to Heaven" always topped it, always.


And oftentimes "Kashmir" was number three.


And what they all had in common was their length, their exploration, they were not quite what had come before, but they were ultimately what the audience was looking for.


But today when you hear those intro notes you usually push the button, you know "Stairway" by heart, you don't need to hear it again, you'll play it when you want to online, on demand, which won't be very often, because it's like that person you went to summer camp with but lost touch with, you know them through and through, a revisit is unnecessary.


But today I let the track play.


And it was a revelation.


Unlike today it's subtle. Multiple hooks are not inserted ad infinitum to ensure we don't lose interest, the track is not begging for our attention, it seems to be cut in a world where the audience doesn't exist, making it ever more interesting.


They say we live in an interactive world, where we're all in touch and the walls are closing in, but the truth is our minds are just as separate as ever before. And we want art that stimulates us and takes us away, reminds us of what once was, gets us in touch with our emotions, shines light on what can be…and that's what "Stairway" does, it seems to be cut just over the hill and not that far away, and we want to go there.


And the lyrics seem straightforward and then they are not, you get images but have a hard time following the narrative, and then there's a switch, it makes you wonder, it really makes Robert wonder. He's been the opposite of his image, crooning instead of belting, but now an intensity is evidenced.

Oh, how many times I felt the same way, growing up on the east coast, the self-professed most important area of the country, I yearned to go where the mountains were tall, to California, where my soul would be free.


But it's not only Robert's vocalization, it's Jimmy's guitar playing, it's like a warm embrace from someone who understands you, who is not wearing a three piece suit but has a full sleeve tattoo. It's a lullaby for grown-ups.


The guitar twinkles, as if the message is being beamed down from the heavens, and then Bonzo finally hits the skins and the track starts to transition, not that you know this at first, but you're still surprised every time it happens, as if the song goes from black and white to Technicolor, from 480 to 4K.


You're on an aural trip, you've transcended your body, you've melded with the music, you're locked on to the beat and then…

The guitar army emerges from behind the curtain, a force that cannot be conquered, and Jimmy starts to wail, not like Yngwie and the rest of the pretenders who don't realize fast and more is usually less, but like someone with experience, who's paid his dues, who's not fresh to the game but is an experienced veteran who can hit the home run again and again.


And suddenly the Robert we know emerges from the wings after Jimmy's machinations and starts to belt. The band is firing on all cylinders, it's a monolith we can only pay fealty too, it dwarfs everything in its path.


And then it fades and is gone.


And you only have one choice, to play it again. And again. And buy the album, to find out what else this band has to say.


And what Led Zeppelin said back in '71 is that you're best doing it your way, by yourself, with your peeps, than hiring outside hands to meddle with your vision. That we react to and love most that which is personal and human. That length is irrelevant if you achieve excellence. That the audience has no idea what it's looking for but when it finds it it embraces it. And if you grab the brass ring you own the world, your acolytes will follow you anywhere, you can sell out stadiums, people will hang on every word, you'll be more powerful than any politician, any business titan, because you own hearts and minds.


And hearts and minds are everything.