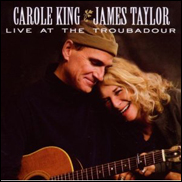 This is not a good movie, but some of the performances are SO good you'll want to pack up your guitar, move to California and try to make it, so you too can feel the exhilaration, the thrill of singing the song inside you and finding out the whole world feels exactly like you and can't wait to hear your next opus.

Actually, "Tapestry" was not Carole King's first album. It was her third under Lou Adler. He saw something in her.

Then again, Lou wasn't starting with Carole. He'd had success with Spirit and other acts that sounded not a whit like each other, he knew talent. And you couldn't deny Carole King.

Not only did she not look like a cover girl, she didn't live the hanger-on, I'm dying to make it life. Rather, she lived life. With her babies. In Laurel Canyon. And on the flip side of her domesticity was her music.

Now James Taylor is great in this movie. But it's not like he's been absent from the scene. Even though his hits are decades behind him, his songs are not far from our consciousness, he's visible, he plays every year at Tanglewood, you can get a ticket.

But Carole King is something different. Her songs were even bigger at the time, and they still get airplay, but the woman…she drifted from the mainstream. Somehow, the songs were separate from the person. And that's so strange, especially in an era where someone has one hit and can never forget it, trades on it ad infinitum, needing the adulation to get by.

But when Carole King sits at the piano in this flick you absolutely die. Sure, when Elton plays "Take Me To The Pilot" his talent is undeniable. But when Carole sings "So Far Away"…

Everybody today thinks they're doing it for the very first time, there's no context, which is probably why they're disposable. But in this exquisite number Carole King acknowledges she's treading a well-worn path but goes on to write a song that not only encapsulates the anguish of distance, but defines an entire category with only this one song in it. Come on, is there any other song that makes you feel like everyone's moved away and you miss them and are unrooted but that's the way of life?

Well, no one moves on anymore, not in the Facebook world, everybody is up close and personal. And if you do something illicit, you'd better be doing it alone, otherwise the person less famous is gonna sell you out, to TMZ, anywhere for a bit of fame and some cash.

And Steve Martin says the performers desired nothing so much as making it. I don't know if I buy that, but if that's true, nothing's changed, but you can make it and have such a greater impact in the world of tech than you can in the world of music.

Then again, JT talks about needing a break.

You no longer need a break. You create your own breaks. But so many people are still looking for a helping hand that no longer exists.

As for those helping hands… Survivor David Crosby talks about the greed, the era we're in now, where the execs think they're bigger than the acts. That's ending, the talent is regaining its power. Will music regain its place in the firmament?

Hearing "I Feel The Earth Move" not only brings back 1971, when "Tapestry" was ubiquitous, one truly feels the earth move. With just a piano and her voice Carole King created an earthquake, it shook us up. When was the last time you heard something new that so transfixed you not only did you have to own it, it changed your life?

And Robert Christgau looks bad decrying the Eagles. That's how you know someone's living in the past, when they decry the future.

That doesn't mean you've got to put aside your crap detector.

We're in an era of revolution. All the old institutions are crumbling and new ones are being built. Don't listen to the cries of those whose businesses are being decimated, music will survive. And if it's as good as that of the people in this movie, everyone will know it and it will rain down cash.