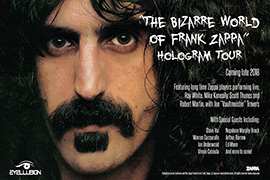 LOS ANGELES (CelebrityAccess) — The late Frank Zappa and his band The Mothers will be back on the road again in 2018 with a little help from science.

The estate of Frank Zappa is teaming up with hologram company Eyellusion to produce the “The Bizarre World Of Frank Zappa” hologram tour, which is set to hit the road in late 2018.

Joining the spectral Zappa on the run will be a slew of his former band The Mothers and other collaborators, including Ray White, Mike Keneally, Scott Thunes, Robert Martin and Joe “Vaultmeister” Travers who are set to perform as the show’s touring lineup

The tour will also include ‘hours’ of never-before-seen concert and studio footage from the early 1970s that will hopefully make the entire experience a little less macabre.

“This mind-melting show we’re putting together celebrates the music, often surreal imagery and humor synonymous with Frank. We will be pushing the limits of what anyone has seen holographically on stage before in a live venue,” said Ahmet Zappa, EVP of business development for Eyellusion and co-trustee of the Zappa Family Trust.

“As a futurist, and hologram enthusiast, Frank fearlessly broke through boundary after boundary as an artist and in honoring his indomitable spirit we’re about to do it again, 25 years after his passing,” Ahmet added.