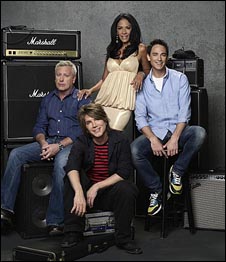 LOS ANGELES (CelebrityAccess MediaWire) — The producers behind mega-hit phenomenon American Idol take the musical reality genre to a whole new level with a mission to find undiscovered American bands that are ready to rock the nation. From hair bands to hip-hop, classic rockers to country crooners, The Next Great American Band scoured the country seeking musical groups of all ages and styles, with hundreds of bands auditioning for a backstage pass to stardom.

From the auditions, the show’s judges – The Goo Goo Dolls’ Johnny Rzeznik, famed percussionist/singer Sheila E. and “Australian Idol”’s Ian “Dicko” Dickson – have already narrowed down the hopefuls to 5 semifinalist bands who will perform weekly in front of a live studio audience. The judges have their say after each performance, but viewers vote for their favorite bands to determine who stays in the competition. Voting begins immediately after each show and like Idol lasts for 2 hours. It is not until the following week when one of the bands is not called to stage to play that they have learned their fate of not making it to the next round.

Each week, the bands perform either original music or covers of varied styles, so far it has ranged from The Rolling Stones, Bob Dylan, Elvis to Rod Stewart. The range of genres have tested their musical limits and let the audience know who they want to hear more from, personally for me it has to be The Clark Brothers, and yes, I voted.

The season finale will bring the ultimate battle of the bands, with the last three groups competing to secure a contract with 19 Recordings and the title of “Next Great American Band.” So far the bands remaining are:

Denver and The Mile High Orchestra