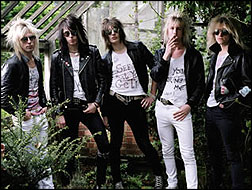 LONDON (CelebrityAccess MediaWire) — British punk band The Towers of London have announced their tour plans for March. Originally formed in the heady days of 2003, the Towers have gained noteriety as much for their offstage antics as for their contributions to the corpus of punk rock with The latest of which being a stint by frontman Danny Tourette on reality-based television program Big Brother. After only 48 hours in the big house, he released himself on his own recognizance by climbing over the wall. The band is touring in support of a new single "I'm a Rat" set to drop on TVT Records on Feb. 16