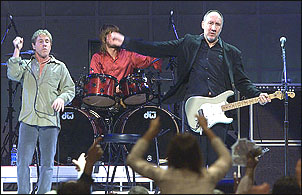 The future of The Who is in question even though
Pete Townshend has said he plans to record with
Roger Daltrey again, but probably not as The Who.
"Because of the power of the shows, and their financial
success in a slightly depressed marketplace, there are
those who conclude that I will naturally continue to perform with Roger under the Who banner," Townshend wrote on
the band's official Web site. "There are those who perhaps
think they know me better, (as a grouch, a spoiler, a self-
obsessed creative, an insecure and pretentious self-styled
artist etc), who conclude that now it is all over."

Townshend also posted that his already damaged hearing was
seriously impaired by the just-completed tour. "I still
do not think I can write new songs for this thing we all
call The Who," Townshend continued. "The Who is a brand
name, and two old guys called Roger and Pete. I think I am
going to stick with the two old guys and let the brand
name look after itself. It (has) done pretty well without
my help — and despite a huge amount of my active interference — for the 20 years since 1982 when I did my last studio session with the band. I don't want to write with
Roger so we can pass ourselves off as a 'new' Who."

"I want to see whether we can write
together, and if he and I have anything we can say together,
that we could not say separately. I am not shying away from
the usual division of labor — Roger is more of a singer
than a writer, and I am claiming to be a more of a writer
than a performer. What I am shying away from is trying to
pick up The Who recording legacy where it was dropped in
1976. Whether we call an album a Who album is not the point.
We can call it what we like. It is how we approach it that
matters."