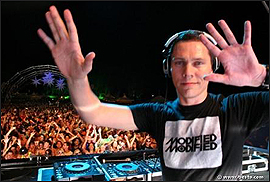 SAN DIEGO (VIP-NEWS) – Tiesto was forced to cancel a DJ set in the US after knocking himself out on an LED screen on his way to the stage.

The DJ was taken to hospital on 21st March and diagnosed with a concussion, forcing him to back out of other performances over the weekend.

"I had an accident and got a concussion at last night`s show. Dr`s told me to rest so no show tonight," he posted on Twitter.

The 45-year-old added: "Thanks for your concern and support."

Tiesto later posted a link to an article on the gossip website TMZ, explaining what happened to him, "to end all weird rumours".

The story claims that Tiesto wanted to perform his set as scheduled, but his management prevented him from going on.
Tiesto

He was knocked from the top spot by Calvin Harris.

In addition to the Friday night San Jose set, Tiesto also missed out on a performance in LA on Saturday evening.

"I hope everyone has a great time tonight at Palladium in LA. I am so sad I have to cancel and thanks brother @zedd for stepping in," he tweeted.

Zedd, whose real name is Anton Zaslavski, is a musician and producer, who worked with Lady Gaga on her latest album, Artpop.

"It touches my heart to see all friends family and fans sending me all these positive messages. Thank you all. That means the world to me," said Tiesto.

He added: "I took that American expression `go knock yourself out` too literally Friday night in the Bay Area."