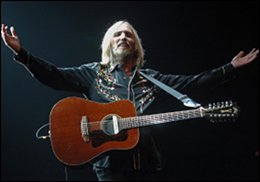 LOS ANGELES (CelebrityAccess MediaWire) — Tom Petty and the Heartbreakers have announced that they are offering fans a full refund after safety officials shut down a performance at the Fonda Theatre on June 8th due to an overcapacity crowd.

The interruption of the show occurred 90 minutes into the performance, which still likely would have continued for another 30 minutes. The show was part of a six night residency by the band at the 1,300-capacity Fonda.

In a post on the band's website, a spokesman wrote: “The satisfaction of fans is of paramount importance to Tom Petty and the Heartbreakers and the band shares the frustration of the fans in attendance that evening who deserved to experience the entire performance.”

"Tom Petty and The Heartbreakers and our representatives rely on the concert promoter and venue representatives to give us an accurate breakdown of the legal capacity for every part of the building and to provide security and other staff to enforce this," the spokesman added.

Fans who attended the June 8 show at the Fonda Theatre can request a refund with proof of purchase anytime prior to September 10, 2013. Tickets purchased through Ticketmaster can be returned at the point of purchase, and customers who purchased artist released tickets night of show at the venue must bring back their original ticket stub to the Fonda Theatre beginning Wednesday for a full refund. – CelebrityAccess Staff Writers