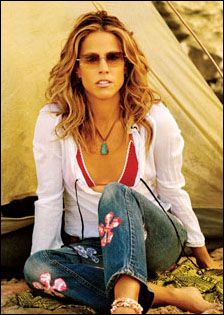 The first concert event of its kind, the Jeep World Outside Festival is a 23-city music/interactive-adventure sports tour that kicks off July 10 at Charlotte, North Carolina's Verizon Wireless Amphitheatre. Ticket prices range from $25 for lawn to $55 for reserved seats. Doors open at 3pm each day allowing concertgoers to spend the day in the Outside Magazine Adventure Village, while professional athletes will be on site to provide hands-on instruction in a variety of adventure activities including whitewater kayaking, rock climbing, mountain bike course, mountain bike trails, freestyle skiing & snowboarding,
skiing & snowboarding and scuba diving. The athletes appearing include Patrick Harper,

known for their powerful emo/pop/punk releases, will have their own stage at The 2002 Warped Tour. The stage will feature the label's bands Finch, Home Grown, The Starting Line, Rx Bandits, The Movielife and Allister, along with surprise performances by other Drive-Thru bands (and Drive-Thru friends, Glassjaw, American Hi-Fi and Autopilot:Off ) in select markets. There will also be a lounge tent near the stage featuring acoustic performances by Main Stage bands who are friends with Drive-Thru artists. The lounge will provide an area where the bands will be signing autographs and hanging out with fans pre- and post-set.

Drive-Thru owners, Richard and Stefanie Reines say of the tour: "We've been going to The Warped Tour since its inception, so we're honored to be a part of it this year. It is going to be an amazing opportunity for all of our bands to play and hang out together and meet fans from all across the country."

MILWAUKEE (AP) — A county highway committee denied a permit to the promoters of a Grateful Dead reunion concert Tuesday, saying the area could not handle the enormous crowd expected.

"You can imagine the amount of humanity that's going to converge on little old East Troy in Walworth County," said committee chairman Odell R. Gigante. "We only have 80 some sheriff deputies. Short of bringing in the National Guard we just couldn't handle it."

The two-day concert would have been the first time Mickey Hart, Bill Kreutzmann, Phil Lesh and Bob Weir staged a concert together since the death of Jerry Garcia, the Dead's leader and founder. Garcia died in 1995 of a heart attack.

Michael Cotter, an attorney for Walworth County, said Clear Channel can appeal the decision. The county would set up another hearing, and Clear Channel could present more evidence on why it deserves the permit. The company also can sue the county for the permission.

A representative who answered the phone Tuesday at Clear Channel in Milwaukee said the company had no comment.

"The ball is sort of in their court for what route they choose to take," Cotter said. "I'm sure they are not going to go away quietly."

Dennis McNally, a publicist for Grateful Dead Productions, and Big Hassle Media, the festival's publicist, had no immediate comment.

Gigante said 200,000 were expected at event, but only 35,000 are allowed in the Alpine Valley Music Theatre, about 30 miles southwest of Milwaukee.

The festival took its name from a 1977 Grateful Dead album. The concerts were to feature performances by the four surviving members as a band and also with their separate projects.

During their 30-year history, the Grateful Dead attained a fan base so devoted it reached cultlike status. Some die-hard fans, nicknamed Deadheads, followed the band around the globe for the jam concerts that became the Dead's trademark.

World has had a free outdoor JazzFest for the past six years in City Hall Park in New York each August. Now it is inaugurating its first annual J&R SummerFest June 13-15 in City Hall Park featuring R&B and gospel music. J&R is presenting the series "to thank the city for all their support" since the Sept. 11 terrorist attacks, and to encourage New Yorkers "to keep returning to downtown Manhattan." The store is a block East from the former World Trade Center.

The line up is Boyz II Men, Ruff Endz and Mike Phillips on June 13; Ashford & Simpson and Alyson Williams on June 14; and Regina Belle, Hezekiah Walker, Boys Choir of Harlem and Woody Rock on June 15.

has announced the artist line-up for the premiere Soul City Cafe ArtBeat performances, which will be featured during a special opening segment at selected shows on her upcoming "This Way Tour" of North America. Jewel and her mother and manager, Lenedra Carroll, have created Soul City Cafe as a multi-faceted program designed to encourage and expose developing talent.

M2M, whom Jewel saw perform in New York City earlier this year, were personally invited by Jewel to be her opening act on the entire tour, as well as headlining Soul City Cafe ArtBeat. Soul City Cafe ArtBeat will begin approximately three hours before Jewel's performance at each of the eight selected venues. The shows will showcase musical acts and spoken word performers. At the end of July, all the artists will convene in Jewel's home base of San Diego for a Soul City Cafe ArtBeat festival, with details to be announced.

The artists featured at the eight special Soul City Cafe ArtBeat venues include Edify, Dustin Fox, Nafeesa Monroe, Off By One, Rebeka Reed, Scooter Scudieri, Shade, and Think Of England. Their work spans genres, from acoustic folk to pop to hard rock to slam poets.

"I listen to all different kinds of music, and I think my fans do as well," said Jewel. "My mother and I are committed to supporting new artists, and we feel it is equally important that we not limit ourselves to a certain style of music. When I first went out on the road as a girl alone with her guitar, I often found myself opening for a hard rock act. It was a terrific experience to play in all sorts of situations, and it also proved to me that audiences are really receptive to a wide spectrum of music."

In addition, two emerging videography talents – Johnny Derango and Roberto Alcantara – have been chosen to work with a seasoned videographer to shoot footage of the shows. They are both students at Columbia College in Chicago. Their efforts will provide content for the Internet so fans can follow the Soul City Cafe ArtBeat artists' performances and behind-the-scenes action throughout the tour.

Jewel began her 2002 "This Way" world tour with a series of Asian dates in late March and early April. She recently returned from a concert swing across Europe, including two nights at London's prestigious Royal Albert Hall.

returns to North America in July for a club/theater summer tour, in
support of the July 23 release of their DVD home video, "Live in London," filmed
last December at a special concert at London's Brixton Academy. The tour will hit
many cities not included on last year's outing.

The tour launches July 5 in Toledo, OH at the Hard Hat Concert Hall and winds
down August 21 at The Fillmore in San Francisco.

July 30 To Be Confirmed

August 15 To Be Confirmed

August 18 To Be Confirmed

changed venues for the June 14 free "Wyclef Jean Live…A Freedom Concert" from Brooklyn's Coney Island Astroland Park to the deck of the U.S.S. Intrepid Aircraft Carrier and Museum on the Hudson River in Manhattan, due to potential crowd control concerns.

Marc Juris, president of muchmusic usa, said," muchmusic usa is proud to host this Freedom Concert at the U.S.S. Intrepid. This is a great American landmark and an important time in our country?s history. It is our hope that these Freedom Concerts that we are creating around the country will connect our viewers with the artists they love, while at the same time celebrating the rights we all enjoy as Americans."

"Wyclef Jean Live…A Freedom Concert" will be the second concert taped for muchmusic usa's Freedom Concert series, which brings top recording artists to perform free concerts at American historical points of interest. Last December, Melissa Etheridge launched the series with a performance inside the concourse of Grand Central Station in New York. The concert event became one of the most talked about shows on muchmusic usa, the viewer-driven all-music television network, that is rated a top five favorite among young people.

"Wyclef Jean Live…A Freedom Concert" will air as an exclusive concert special to premiere on muchmusic usa on June 20 at 9 pm and 12 am EDT.