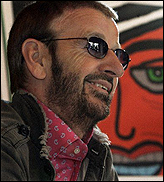 (CelebrityAccess MediaWire) — House of Blues will be producing Ringo Starr’s 9th All Starr Band tour this summer. Ringo's 9th outing will kick off June 14 in Rama, Ontario, Canada at Casino Rama on June 14 and wind down July 20 in New York at Radio City Music Hall.

The full tour itinerary will be announced shortly. In the meantime, updates can be found at www.ringostarr.com

Starr's previous All Starr tours have been produced by David Fishof. — Jane Cohen and Bob Grossweiner

Some in the crowd of about 1,500 at the "British Invasion 2K6" show pelted police with rocks and bottles, forcing the officers to withdraw, police spokesman Sgt. Rick Lindsey said.

The rioting began when police responded to a report of a stabbing at the National Orange Show Events Center concert. When officers arrived, the crowd became agitated and several fights broke out, forcing the officers to back off, Lindsey said.

After backup arrived, the officers went in again and extracted the stabbing victim and another person who was beaten, Lindsey said. But the violent crowd forced officers to withdraw again.

With additional backup, including Los Angeles County sheriff's deputies and Fontana police, officers lined up in phalanx formation to clear the streets and they fired pepper balls and tear gas to move the crowd, Lindsey said. Officers were pushed back by the crowd before they reached the stabbing victim, but were successful on a second attempt. He was transported to Loma Linda University Medical Center, officials said. He and another man who was hit by chair were both listed in stable condition late Saturday, police said.

According to the San Bernardino Sun, the concert, known as British Invasion 2K6, began at seven hours earlier at 2 p.m. in the Orange Pavilion. Several witnesses said racial shouts from white supremacist and neo-Nazi groups spurred fighting during the show.

One concert-goer took off his belt and began whipping others with it, said Melissa McEwan, 17, of Westminster.

Police in full riot gear descended on the crowd, shut the show down and herded concert-goers out of the venue. Shortly after 9 p.m., some 1,500 concert-goers funneled out onto E Street.

As the crowd dispersed they destroyed two police cars and vandalized area businesses, Lindsey said. A trash bin was set on fire and storefront windows were smashed.

San Bernardino Police called for help from other police agencies as far away as Pomona as the throng moved into the streets, some directing their anger at two police vehicles parked inside the venue. Both were destroyed, Lindsey said.

Helicopters hovered over the area near the fairgrounds as the crowds congregated at nearby fast-food restaurants.

As police ordered the crowd to disperse, angry concert-goers began trashing nearby businesses.

Glass bottles flew. Angry youths starting smashing in windows and tearing up the drive-thru menu board at a nearby Jack In The Box restaurant and kicking at cars in the parking lot, while frightened employees huddled inside. Signs and windows from other local businesses and storefronts were also vandalized.

Younger concert-goers – some as young as 13 – ran away. Others frantically dialed their parents on cell phones.

"I want to get out of here," said Keith Madzar, 24, a concert-goer from Whittier. "I don't want to get hit with nothing."

"All of a sudden, they were beating each other inside," the Yorba Linda woman said. "Everybody runs out here and it starts turning into a riot."

Several people said fighting broke out after a group of skinheads began shouting "white power" during the concert.

The venue was playing host to the British Invasion 2K6, an event organized by SOS Records and Showcase Presents, according to the National Orange Show Events Center's Web site.

Headlining the event were several hard-core punk bands, including G.B.H., The Addicts, Broken Bones and Vice Squad. It was billed as one of the most famous punk-rock festivals on the British Invasion 2K6 Web site.

This was the third year the event was held at the National Orange Show Events Center in the Orange Pavilion.

Two sergeants were injured in the fray. One received cuts on his hand while another was hit the items thrown at police officers.

"People were throwing rocks and bottles at my officers," Lindsey said.

Some of the agencies used pepper balls and tear gas to disperse the crowd, which went off like small explosions. Flashing police lights reflected off the clouds of gas that hung in the air. A blackened trash Dumpster set on fire earlier was still smoking.

By 10:30 p.m., police reported the group was beginning to disperse but E and Mill streets were littered with trash, broken glass and vomit. About the same time, police were herding several hundred people south on E Street away from the National Orange Show Events Center. Officers ordered concert-goers out of restaurants and gas stations where they had congregated.

"If you don't leave we're going to force you to leave. Let's go," shouted one police officer to several punk rockers who had congregated at a Del Taco restaurant on E Street.

Some in the crowd shouted profanities at police and others seemed to be doing anything they could to annoy officers, including crossing streets that had been declared off limits. Others simply were confused as to where police were directing them while they search for their friends.

A few small groups waited for cars that were still stuck inside the National Orange Show Events Center grounds, and others waited outside the gates until they could retrieve their cars.

Timothy Morton stood in the cold with four of his friends, waiting to pick their car up.

"They kept telling us to walk and keep going," the 18-year-old Morton said. "We live in (expletive) Orange County! How are we supposed to walk there?"

Other parents who rushed to pick up children waited anxiously for hours.

At the closed Tacos and Burritos stand at Arrowhead and Mill, Corona resident Diana Lopez waited nervously for her 14-year-old son, Xavier.

"I saw the flier and it didn't say there were any age restrictions," the teary Lopez said. "Everything looked OK when I dropped him off.

"The police won't let me go find him, they pointed a rifle at me and told me to leave the area."

As Lopez spoke, she said smoke had burned her eyes and throat. Just then, she spotted her son and a friend walking toward her and the family was tearfully reunited.

At least six people were arrested on suspicion of various charges throughout the night, Lindsey said.

With help from San Bernardino County Sheriff's, the CHP and police agencies including Pomona, Rialto and Fontana, the crowd was herded in several directions away from the concert venue.

Most of the concert-goers were from out of town, as far as Orange County, Los Angeles and Fresno. Some frantically called parents or friends to come pick them up but many were stranded, separated from their friends and lost in the throng.

Travis May of Ontario was relieved to run into friends from Orange County after he was separated from his group. As police cleared the crowd from the concert venue, Travis said some concert-goers began tearing up the fence trying to get out.

"They tear-gassed us out with no warning," said Travis, 15. "The only place to go was outside."