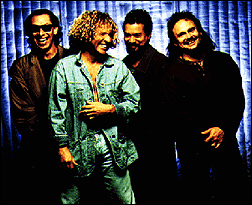 The Mandalay Bay Events Center in Las Vegas was the fastest sell out in the venue's five-year history with all tickets gone in less than 30 minutes. This tour marks the first time Eddie Van Halen, Alex Van Halen, Michael Anthony, and Sammy Hagar will perform together in more than nine years.

NY, New York (CelebrityAccess MediaWire) – Turnstile Entertainment and Creative Battery are pleased to announce the launching of CLIFFORD THE BIG RED DOG LIVE! based on Scholastic's beloved character. CLIFFORD LIVE will play cities throughout the US and Canada during a two year touring schedule. The Broadway style musical production will have its Official World Premiere in Atlanta April 21-25 at the Fox Theatre.

For more than 40 years, Clifford the Big Red Dog has charmed kids and parents alike with his engaging adventures and "Big Ideas." The Clifford book series has sold over 110 million copies; while episodes of the top rated TV series airs on PBS stations over 3500 times a week.

"Turnstile has wanted to produce a show based on Clifford for some time now and it has been a pleasure working with our partners, Scholastic Entertainment and Creative Battery in achieving this goal. Clifford and his friends are truly loved and this show is an event that families will greatly enjoy and never forget," says Turnstile Entertainment's Stuart Snyder.

"We are thrilled to bring Clifford to life. Families will experience the wonders of theater through this unique production, where perspective and reality change before their eyes," says Creative Battery's President and CEO, Scott Sanders. Adding, "This show invites kids and their parents to think, imagine and participate as they learn valuable lessons of friendship and teamwork.

Tickets begin at $12.50 with a limited number of VIP "Big Dog Seats". The producers are aggressively reaching out to the three generations of fans that have come to love Clifford through Scholastic books, PBS television, video and licensed merchandise. The show will be playing in scaled down arenas as well as proscenium theaters. From its original concept, the show was designed to fit equally well in both types of venues.

"This show is Broadway quality for kids," says director Gip Hoppe. "We created a charming smart show that really speaks to them." Every well-loved character from Birdwell Island – including Emily Elizabeth, Cleo, T-Bone, Jetta, Charlie and of course Clifford star in this energetic spectacle. The story revolves around Emily Elizabeth who wants to put on a show with her best friends. Everyone has different ideas, but ultimately the kids decide that the story should be about Clifford's life, from puppy-hood on.

"Clifford The Big Red Dog LIVE features a cast of 12, a crew of 20, and a 10' tall mechanical Clifford puppet that will thrill kids and parents alike. It is a large-scale production that requires four tractor-trailers to transport it from city to city. "Clifford is huge," says Hoppe. "It's an inflatable air-conditioned balloon with moving mouth, eyes, ears, and wagging tail, all operated by two actors inside. I cast people who can move, with the body strength to withstand the strain of running the puppet."

All of the show's costumes, props, and scenery were custom built for the show, including Curry's astonishing Clifford costume. "We have one of the best design teams in the world," says Hoppe, "The cast is made up of very talented, singers and dancers, performing live, not lip synched."

Tom Sturge, the show's lighting designer, says the sets and lighting scheme will dazzle audiences of all ages. "It's a combination of art and technology," he notes. "We provide the environment for the actors to do the show, and make the sets look great. It takes a lot of attention to color, but the lighting transforms the set. We go to North Pole for the aurora borealis, and to the moon to see the stars."

For the Clifford Live! Tour, Sturge employs a versatile self contained lighting computer called Grand M.A. But he hopes audiences focus on the show, and not the staging techniques. "We use a lot of technology," says Sturge, "but the whole point is to realize the vision of the show. Besides, four-year-olds are best audience you could have. They're so enthusiastic."

And of course on a 40-year time tested property like Clifford, the merchandise plays a key role in the tours overall numbers. Kids and parents attending the show will have plenty of wonderful "Clifford Live!" souvenirs to choose from, according to Josh Furlow of Turnstile Entertainment. "Merchandise includes everything from specially designed lights, apparel, pennants, hats, program books and plush toys of the characters. We created items that deliver value and excitement tied directly to the storyline of the show."

Complete tour information and dates are available at www.cliffordlive.com

"The festival opens Wednesday August 11th at Rogers High School with Dave Brubeck presenting a sacred concert, The Gates of Justice, dedicated to the 40th anniversary of the passage of the Civil Rights Bill," Wein continued."

On August 12 there will be a gala at Newport's most opulent Gilded Age mansion, The Breakers. This event will benefit the non-profit
Preservation Society of Newport County. Harry Connick, Jr. and His Orchestra will perform at the annual Friday night celebration on August 13 at the famed Newport Casino at the International Tennis Hall of Fame.

The Santa Barbara International Jazz Festival attracts more than 30,000 people annually and is also celebrated for showcasing well-known local talent such as the jazz works of Peter Clark. By offering a variety of artists, the Santa Barbara International Jazz Festival has become a premier event for California and one of the world's foremost jazz festivals.

"I am extremely pleased to announce the most recent addition to our concert/music festival division, the Santa Barbara International Jazz Festival," stated Paul Feller, president & CEO and Santa Barbara resident. "This marquee property is not only a strategic addition to our live entertainment event portfolio, it will also provide significant value to the welfare of our community." –Bob Grossweiner and Jane Cohen

USO To Honor Troops At Fort Hood On April 22

Responsible for capturing Saddam Hussein on December 13, soldiers of Task Force Iron Horse are returning home after nearly a year in the Sunni Triangle — the most dangerous area of Iraq. Soldiers of the 4th Infantry Division also helped to open and supply thousands of schools, hospitals and clinics and repair bridges, roads, power plants and oil pipelines within the Division's area of operations. An estimated 50,000 are expected to attend the day-long festival. Other activities scheduled include:

The event is sponsored by Fort Hood's Morale, Welfare and Recreation, the 4th Infantry Division, the USO, Army and Air Force Exchange Services, the cities of Killeen and Copperas Cove, the Association of the U.S. Army, and other local groups and companies. –Jane Cohen and Bob Grossweiner

LOS ANGELES (AP) — Janet Jackson, winding up a week of television interviews to promote her new album, drew about 3,000 fans Friday for a live broadcast of "On-Air with Ryan Seacrest."

There were no wardrobe malfunctions — though the show aired on the East Coast with a seven-second tape delay, just in case.

And there were no questions about her breast-baring performance during Super Bowl.

The crowd filled a shopping center in the heart of Hollywood to see Jackson, who wore low-slung cargo pants with suspenders and a striped T-shirt that exposed her midriff. She sang two songs, taking the stage with dancers for one number, sitting on a stool for the other.

The singer also took a few questions from Seacrest and a couple of fans. All spared her queries about her Super Bowl halftime number with Justin Timberlake.

Jackson has said she is trying to put the incident behind her, but has had to field questions while promoting her album, "Damita Jo," which debuted Tuesday.

She also skirted questions Friday about her love life, including whether a ring on her left hand signaled her engagement to rapper-producer boyfriend Jermaine Dupri. "It's a gift," Jackson said. "I've had my ups and downs with relationships. I'm very happy."

Jackson and Timberlake's duet sparked a round of recriminations and complaints about broadcast standards. Some fans Friday said the outrage was overblown.

"They made a very big deal of it, they blew it all out of proportion," said Alicia Hardwick, 31, of Los Angeles.

CLEVELAND (AP) — An ailing Britney Spears postponed her concert Thursday night at Gund Arena, her third postponement in as many weeks.

Publicist Leslie Sloane Zelnik said she didn't know specifics of Spears' illness. The singer postponed two shows in mid-March because of a knee injury suffered while performing in Moline, Ill.

As Thursday's concert time approached, fans were still heading through a steady rain for Gund Arena, where security guards turned them away. The message board above the ticket windows flashed the rescheduled date, June 29.

The earlier postponed shows were in Rosemont, Ill., and Auburn Hills, Mich.