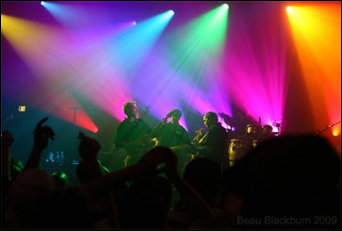 CHICAGO, IL (CelebrityAccess MediaWire) — Umphrey's McGee's new album, Mantis, debuts at #62 on the Billboard 200 Chart, and #6 on the Indie Chart. Mantis also reached #25 on the Itunes Album Chart and #9 on the Itunes Rock Chart.

With Mantis' week-of-release sales numbers at more than double that of the band's previous album (The Bottom Half 2005), Umphrey's McGee has defied the record industry's downward trend in sales. This is due in part to Mantis' innovative digital strategy, where fans who pre-ordered the album gained access to exclusive bonus material, and as more pre-orders were received, fans participated in "unlocking" new levels of content. Billboard Magazine recognized Umphrey's McGee for their creative marketing savvy, calling the Mantis pre-order campaign "…a likely template for emerging and established acts [looking to] kick-start interest in a new release."

Umphrey's McGee has forged a new path in digital music delivery by building a grassroots and viral grassroots marketing plan that super-serves their fan base. The strategy relies on fan support, and is a win- win for both the fans and the band. As Umphrey's McGee guitarist Jake Cinninger explains, "Our fans have always been there for us, and we wanted to return the favor and do something for them. We knew that this was a program that they'd love and that's a good thing, because without them, it wouldn't have worked." Umphrey's McGee manager Vincent Iwinski adds, "This was certainly an experiment in which we didn't know what would happen, but we are pleased that the fans supported the idea, and ran with it."