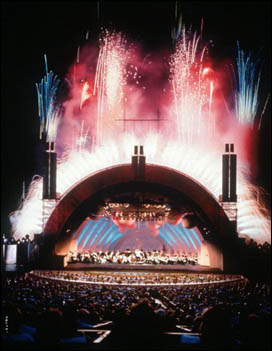 LOS ANGELES (AP) — A state appellate court ruled that the operators of the Hollywood Bowl can tear down its 73-year-old orchestra shell and build a new one.

On Wednesday, the three-judge panel denied the appeal of preservationists who argued that the bowl's trademark white shell is an essential part of its design. The preservationists believed that county officials and the bowl's main tenant, the Los Angeles Philharmonic Association, should find a way to renovate the shell.

"We think this is the end of the line, and the project will go forward," said James Arnone, the association's attorney.

The battle over the bowl began two years ago after the county Board of Supervisors approved plans for a new shell. Supervisors said the existing shell was aging and its small size and poor acoustics prevented orchestra members from hearing each other during performances.

Two preservationist groups sued to stop the plan but a Superior Court judge ruled in April 2001 that the project could go forward. The groups filed an appeal, saying legal descriptions of the plan were misleading and people who wanted to object to the shell's replacement didn't receive proper notice.

The appellate court disagreed, ruling that procedural requirements had been fulfilled.

The groups vowed Wednesday to take the battle to the state Supreme Court.

"It's a dangerous set of precedents this would set," said Robert Nudelman, a leader of one of the preservation groups. "We (would) have to fight this fight as other historic buildings get threatened. The door has just been left open for the bulldozers."

An earthly version of his wish for a "Hall of Fame with gold guitars and fiddles a-hanging on the wall" is coming true as the Tex Ritter Museum and Texas Country Music Hall of Fame reopens in a new building dedicated to the state's country music pioneers.

Previously located in a historic home that also houses the Panola County Chamber of Commerce, the new museum has moved into a $2.5 million city-owned building featuring music memorabilia, a performance hall and gift shop.

"We want to highlight how many of the great country music professionals came from Texas, how significant Texas music is to the overall scene of country music," said museum founder Tommie Ritter Smith, Tex's cousin.

The museum, which started in 1993 as a modest display of memorabilia donated by the singer's relatives, captures "the spirit of my dad as a guy and an entertainer," said actor John Ritter by telephone from Los Angeles. "It's amazing that in a tiny little town, so many people go to this museum."

Tex Ritter, who died in 1974, rivaled Gene Autry as a leading Western film and recording star in the 1930s. Known for his drawl and his reputation as a "real" cowboy, he appeared in 78 films and recorded hundreds of songs, including the title song for 1952's "High Noon," starring Gary Cooper.

the Wolf Trap Foundation for the Performing Arts, in Vienna, VA.

have entered into an exclusive multi-year full ticketing services agreement, renewing
and expanding their existing long-term partnership. Under the terms of the
agreement, Tickets.com will continue to facilitate Wolf Trap ticket sales through its
Private Label, and tailor-made distribution systems.

Theater, home of the original Showtime at the Apollo Amateur Night
Showcase, will have a

new venture for the 2002/2003 season of the celebrated, syndicated TV program, "It's
Showtime at The Apollo".
The Apollo Theater Foundation, Inc. has entered into a production deal with de Passe
Entertainment to produce "It's Showtime at The Apollo" for the 2002/2003 season with
The Heritage Network serving as its sales and distribution arm. The new season is
scheduled to begin taping immediately at the historic Apollo Theater.
The partnership with The Heritage Network and de Passe Entertainment is the first of
many such strategic alliances designed to catapult the Apollo to new and dynamic
heights of entertainment excellence, setting the stage for the much-anticipated launch
of an Apollo entertainment franchise, which will include Apollo Television and Apollo
Records.

Suzanne de Passe, chairman and CEO of de Passe Entertainment, is a celebrated
icon in the television and music industries. "I'm extremely excited to return to Harlem
where I was born and raised," she said. "It is indeed an honor to serve as the
executive producer of Showtime at The Apollo." She won her second Emmy award in
1985 as executive producer of the acclaimed television special Motown Returns to The
Apollo. In addition, Ms. de Passe has produced several other award winning television
programs including "Lonesome Dove"; "Sister, Sister"; "The Jacksons: An American
Dream"; "The Temptations"; and "Motown 25: Yesterday, Today, Forever."

"We're extremely pleased to continue our service with Tickets.com. This permits Wolf
Trap to provide an exceptional level of customer service to our patrons. Our online
ticket buyers are successfully utilizing the shopping cart, best available and private
label technologies for internet sales, which have grown exponentially," said Charles A.
Walters, executive vice president and CFO, Wolf Trap Foundation for the Performing
Arts. "In addition, we're now able to track ticket usage with their Gate Access Control
feature, and are pleased to announce that we have broken all existing ticket sales
records while with Tickets.com."

"The Filene Center at Wolf Trap Farm Park is the only National Park for the
Performing Arts in the United States, and we're pleased to be a partner of this
significant venue," said Susan Fobes, senior vice president, National Sales,
Tickets.com. "Thanks to the successful partnership between our two organizations,
Tickets.com has firmly established itself in the region by providing an innovative and
flexible ticketing experience."