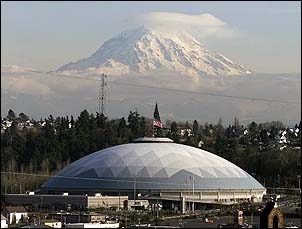 (CelebrityAccess News Service) – Tacoma city officials and Comcast Cable representatives proposed a name change from the Tacoma Dome to the Comcast Dome as part of a 10-year, $7 million proposed partnership that provides the city with up to $3.5 million in cash and access to up to an additional $3.5 million of free cable advertising and promotional opportunities.

The naming rights proposal, which calls for the City of Tacoma and Comcast to work closely together on co-promoting the Dome and its events, must receive final approval from the Tacoma City Council, with the vote scheduled for December 16.

"This agreement goes far beyond dollars and cents, but represents a true partnership between the City of Tacoma's Public Assembly Facilities Department and Comcast," said Mike Combs, PAF Director. "I applaud the men and women of City Council for their entrepreneurial spirit and support of this project. The city not only will benefit financially from this partnership, but we will have the opportunity to utilize millions of dollars in free advertising to promote the City and the Dome. In an increasingly competitive marketplace, access to this kind of advertising inventory will position the Dome to better serve our clients."

Highlights of the proposed naming rights agreement include the following:

— Up to $7 million in overall value to the City of Tacoma during the
10-year term of the agreement, including $3.5 million in cash and
$3.5 million in cable television advertising inventory and
promotional opportunities;

— Commercial airtime provided by Comcast would air in Western
Washington reaching in excess of 700,000 households and airing
during all times of the day across 31 cable television channels,
including ESPN, CNBC, CNN, The Discovery Channel, Fox Sports Net,
HGTV, Lifetime, USA Network and the Food Network;

— Comcast would have the opportunity to record and rebroadcast events
on local community television channels or other cable networks that
take place in the Dome such as school graduations and sporting
events that do not already have broadcast rights provided agreements
could be reached with event promoters.

McGreevey Says Port Authority Will Pay For Xanadu Rail Line; A Week After State Officials And Developers Signed An Agreement On The $1.3 Billion Xanadu Project

The announcement comes a week after state officials and developers signed an agreement on the $1.3 billion Xanadu project, which will include indoor skiing and surfing, Formula One-style racing, shops, restaurants, a hotel and offices on 104 acres surrounding the Continental Airlines Arena.

Officials of the New Jersey Sports and Exposition Authority, which controls the Xanadu site, had been insisting that a rail line would be part of the development, but before Wednesday no funding source had been identified.

"This rail link will serve the entire region. It will provide economic opportunities throughout the region, and will help us relieve traffic congestion as we grow," according to a statement by McGreevey, who appoints half the port authority's board.

George Zoffinger, the sports authority president, said, he believes there is "a major consensus among everyone in the business, labor and environmental communities that this is a positive thing."

Zoffinger said the 1.9 mile rail line would run from the sports complex to New Jersey Transit's Pascack Valley Line, which would be linked to New York, Newark, Hoboken and various other points via the Secaucus Transfer Station rail hub. He said the rail link probably would not be completed before Xanadu's initial attractions open in early 2006.

New Jersey Transit and the Port Authority did not immediately return calls for comment.

Wednesday's word of rail funding came just hours after Bruce Ratner, a New York-based developer who is seeking to buy the New Jersey Nets, announced his plans to build an arena for the Nets in Brooklyn, which would be designed by renowned architect Frank Gehry.

Whether the Nets continue to play at the Continental Airlines Arena in East Rutherford is unrelated to the Xanadu plans, officials said. Officials have insisted that the arena, which is also home to the New Jersey Devils, will remain in operation regardless of where the Nets and Devils play.

Cobb Galleria Centre Getting A PAC In 2006

(CelebrityAccess News Service) – Cobb Galleria Centre Complex in Atlanta is getting a performing arts center, scheduled to open in late 2006.

The new venue will include a 3,000-seat theater, a 700-seat theater and a 200-seat black box, along with additional meeting and educational space.

"There is no better piece of real estate in all of metro Atlanta for something like this," said Michele Swann, general manager of the Cobb Galleria Centre. "The unprecedented success of Cirque du Soleil's Varekai this past spring, which sold out their tickets and our area hotels, just proves that the visibility and easy accessibility of this area are second to none." –Jane Cohen and Bob Grossweiner

The $50,000 award from the national Blanche and Irving Laurie Foundation is given to one theater each year.

Studio Arena's efforts at play development will be further enhanced by a three-year, $170,000 grant from the Buffalo-based John Oishei Foundation announced this week.

"We are very excited by the opportunities these grants offer us in providing an environment for playwrights to create new work and to become an integral part of the Studio Arena artistic life," said Ken Neufeld, the theater's executive director.