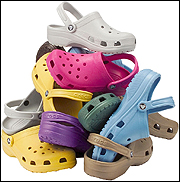 TEMPE, AZ (CelebrityAccess MediaWire) — Campus police at Arizona State University have reported that an unknown suspect stole nearly $2,400 worth of “Crocs” shoes from the Wells Fargo Arena in Tempe, Arizona.

The suspect entered an unlocked room in the basement of the building and removed 68 pairs of the popular rubber sandal, according to the Arizona Republic.

ASU officials believe the incident happened between May 24 and May 31.

Campus police have no suspects, leads or witnesses to the shoe heist. –by CelebrityAccess Staff Writers