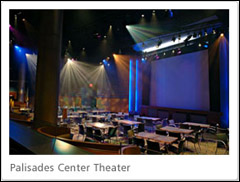 WEST NYACK, NY (CelebrityAccess MediaWire) — The Opus Theater in the Palisades Center closed its doors Monday "for the final time," according to a recorded message on the entertainment center's voice mail.

The Opus Theater was a victim of an inexperienced management team and insufficient marketing that failed to impart the concept, those familiar with its operation said, reports the Journal News.

"All upcoming shows and private events have been canceled," said a message placed on Opus' voice-mail system by the theater's general manager. The recording said the club closed Monday.

"If you did have a private event scheduled with us you will be receiving a call within the next several days to work out arrangements and refunds," the recording said.

Renee Pfefer, spokeswoman for Metropolitan Talent Presents, a concert promoter based in Manhattan, said the company had just begun promoting concerts at the 16,000 square-foot, 260-seat venue.

Among the acts she had to cancel was Bo Bice, an "American Idol" finalist, who was due to perform May 16. She said she had been working also to book another rock band, the Radiators, and Colin Hay, former lead singer of Men at Work, who was scheduled to play July 15.

The $5 million West Nyack theater was the first of what was supposed to be a string of more than 20 across the United States.

The fate of any others was not immediately known.

Opus management didn't return calls seeking information about the reasons for the closing.

The Journal News also reported that Peter Janoff, general manager for the Palisades Center, said that although the concept was well-financed at its inception, Opus management didn't have a focused theme or marketing program to get it off the ground.

"They didn't get the word out on time and in the right manner," he said. "Their message was not – in our opinion – a consistent message."

Opus originally opened as a theater/restaurant concept but eventually morphed into a party and special-events venue, he said.

Janoff said Opus management hasn't yet vacated the space, which is on the mall's fourth floor near Legal Seafood and Outback restaurants and a Target store.

It was too soon to determine what would become of the space, he said.

The closing of Opus leaves a void in music venues in Rockland, said Paul Gebbia, lead singer for Cheatin' Soccer Mom, a local rock band that played at Opus three times during its 16-month run.

The spot was excellent, Gebbia said, but the staff people he encountered were young and inexperienced.

"The idea was to have a rock venue, but I don't think they really knew how to really put it together and make it happen," he said.

Concert promoting takes a lot of marketing and advertising to let people know not only what events are upcoming but what the business is trying to be, Gebbia said.

"We actually saw it falling apart towards the end," Gebbia said, "and we knew it wasn't going to last."