(Hypebot) – Spotify has drawn fire for making direct deals with artists. But while it might offer a higher net royalty rate, are these deals really good for artists overall vs. the clout of a major label. This fascinating Chartmetric analysis looks at the numbers.

After Spotify’s April 2018 initial public offering (IPO), a lot of ink has been spilled on the Swedish music streaming giant’s theoretical “direct deal” licensing with independent artists. Here’s the initial June 6 2018 exclusive from Billboard, and their detailed follow-up already written on the phenomenon.

Long story short: Spotify has courted favor with the “Big Three” major labels (Universal Music Group, Sony Music Entertainment, Warner Music Group) for years to gain access to the biggest artists of the Western world and their recorded music repertoire, which typically are 100% copyright-owned by those labels. Permission was granted (and equity received), labels prospered in the digital music era, and Spotify grew.

After the IPO and the Big Three (and the independent digital rights-focused Merlin Network) made out with a nice liquidation, Spotify’s gloves came off, and allegedly began negotiating directly with independent artists and their managers. “Independent” in this case means completely do-it-yourself (DIY), as opposed to being signed to an independent label- which likely are hit worse due to their smaller market shares.

Essentially, Spotify and artists would cut out the “middleman”. The value for Spotify is that they could pay out less to the artist than their label, and the artist would receive a higher percentage than they would probably receive from their label anyway.

A valid argument for the major labels is “100% of nothing is still nothing.” Here’s what happens in the absence of a major label: no six-figure advances, no access to a decades-deep radio promotion network, no physical distribution infrastructure, no global marketing system in place. In other words, there’s no career bandwagon to jump on…just a long, long road to walk.

But for many freedom-oriented DIY artists, that’s exactly the road they want to take. Enabled by a laptop and WiFi, select artists have proven to be quite capable of connecting with their fans in effective and profitable ways. The digital aggregator, forged in the 1990s and itself coming in several flavors (non-selective like CDBaby, Tunecore, DistroKid; selective independents like Believe Digital, Fuga, INGrooves; or major-label-owned distributors such as The Orchard, WEA, or Caroline), became these artists’ gateway to Spotify, Apple Music, iTunes, Deezer and the dozens of digital streaming providers all over the world.

The Merlin Network provided independent digital rights muscle to the most successful of these artists, while newer players such as Willard Ahdritz’s label service AWAL (under the Kobalt Music Group umbrella) have come to provide scalable multi-functional services such as up-to-the-minute data analytics, streamlined royalty collection, playlist pitching, sync licensing, and marketing support.

So the question is: who’s winning?

Traditional major label artists or wholly independent ones? What does “winning” even mean in this case?

While we at Chartmetric can’t answer definitively, we can try to provide some clear-eyed data into this discussion.

To explore, we’ve selected a handful of artists on each side of the equation: five “Major” artists and five “DIY” artists as samples. Of course, such a small number cannot be statistically significant, but the nature of a relatively new industry topic relegates our scope to a case study-level.

One important thing to note is we will attempt to move past the “more is better” mentality. More than likely, we are expecting the Major team to outnumber the DIY on most metrics. As much as streaming and social media have theoretically leveled the playing field for artists of all legal statuses, the truth is that systematic industry practices (e.g., radio promotion) still heavily favor the Major team in sheer scale of exposure, which feeds upon itself and creates a significant disadvantage for the DIY team.

The DIY artists have been anonymized, as they were tipped to Chartmetric as having possible “direct” licensing deals with Spotify. Even if any alleged Spotify direct deal is no longer current or never even existed, the DIY artists’ legal and creative status is still worth measuring against major-label acts. It is with this disclaimer that we will proceed.

We identified a general “vibe” among the five DIY artists, which was very electronic-tinged with notes of indie pop, dance, and hip-hop. They are from different countries (three ex-US, two American) and all are primarily English-speaking in their content. We will refer to these artists as DIY 1, 2, 3, 4 and 5.

So in an attempt to control for other factors, we identified five major-label artists (subsequently referred to as “majors”) with similar genre aesthetics, also all English-speaking: Kali Uchis, Khalid, Charli XCX, Billie Eilish, and Halsey. 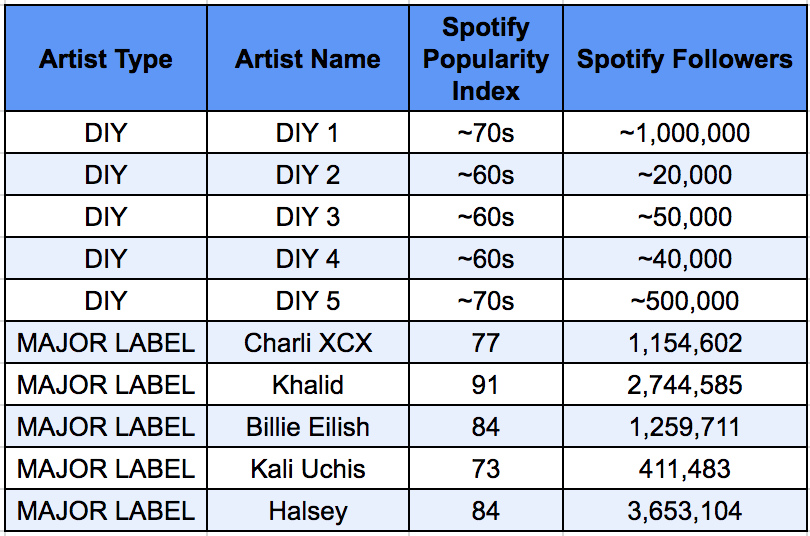 We are examining five major label and five DIY artists…knowing full well the majors likely have much more in total “success” metrics.

At first glance, we can see the majors already outdoing the DIYers in both Spotify’s Popularity Index (SPI) and Spotify Follower Count, which is expected.

When aggregating the groups by average (instead of medians: we chose to include outliers to capture their achievements), the same expected story. Majors > DIYs, with the only aberrations being Facebook Likes and SoundCloud followers.