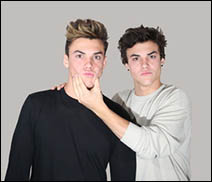 FREEHOLD TOWNSHIP (CelebrityAccess) — 28 people were injured during a live event at the iPlay America Event Center when a crowd of mostly teenage girls surged towards the stage, according to the Asbury Park Press.

The event, part of the Dolan Twin's 4OU tour, was put on hold while police restored order to the venue.

"Everyone settled down once we got on stage and told everyone ‘please settle down,'“ township police Officer Daniel Rehberg told the Asbury Park Press.

Most of the injuries were minor, twisted ankles, hyperventilation and bloody noses, but seven patients were transported to the hospital. Rehberg estimated the girls were mostly between 11 and 15 years old, the Asbury Park Press said.

The Dolan Twins are YouTube sensations; known for the humorous short videos they post about their day-to-day lives. – Staff Writers