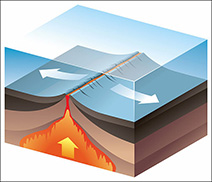 (Hypebot) – In this piece, Dmitri Vietze examines six different societal shifts that have been stewing beneath the music industry, which are beginning to bubble up in different and sometimes unexpected ways, bringing destruction but also the potential for new opportunities.

Tech-fueled earthquakes have shaken the music industry and it’s easy to point fingers about who’s at fault, from streaming services to record labels, from user-generated content platforms to hardware manufacturers looking for a loss leader in music. To kick off Music Tectonics, I identify six shifts in our society that have been simmering beneath the industry’s ground and are surfacing in unexpected ways. Yes, earthquakes are destructive, but they also create beautiful, dramatic landscapes. The hope is to push the conversation away from finger pointing and towards a recognition of larger societal patterns that got us here and some of the positive opportunities arising from these shifts.

Some of these shifts seem so obvious that we typically don’t even talk about them. Yet they then seem to be forgotten as we propose new directions for the music business. Other shifts are talked about all the time, but are incomplete without being presented alongside related patterns. As Music Tectonics takes off, we will look at emerging news through this lens, adding additional shifts or replacing the ones here as they lose currency. We believe that following these larger patterns that surround music technology will lead to more success than chasing the popcorn of new ideas generated without this context in mind.

Let’s look beneath the surface to see the tectonics that are redefining this era in music.

Shift 1: Music Production is in the Hands of the Masses

One significant shift is that many more people have access to learning to play and record music. It starts with a tidal wave of free or inexpensive educational videos allowing children and others with the will and dedication to learn and master instruments, vocals, and other musical and recording techniques. The explosion of electronic music tools allows an individual to expand their artistic vision onto more instruments and sounds, re-creating entire bands or orchestras.

“Bedroom studios” have proliferated. Nobody needs anybody’s permission or a significant budget to record music and make it available. Styles and scenes have emerged in unexpected places challenging past notions of “what it takes” to make music that can build an audience. Hybrids proliferate.

The diversity of sounds and emergence of musical tribes challenge the idea of mass marketing. Artists and songs sometimes appear to “come out of nowhere.” That is immediately followed by imitation.

Splintering of from this shift is another one in which it becomes hard to distinguish between a musician and a fan. Instruments become the product, rather than the implement. Untrained fans create music their immediate circle can enjoy instead of relying on “professional recordings.”

Shift 2: There is Substantially More Music Than Ever

Because the means of production are in the hands of the masses, the number of recordings made has grown immensely, as has the percentage of recordings that make it into the “marketplace.” Though Billboard reported that the number of releases peaked at 106,000 titles in 2010, the fact that at least 75,000+ albums are released each year means the overall catalog of released albums has grown significantly in the past decade. We’ve reached a point in the music industry where the paradox of choice has not only outgrown the shelf space of the largest Tower Records in its heyday, many music lovers are paralyzed by where to start.

This also means that decision makers at festivals, venues, in music supervision, and in the media are drowning in music.

As online music providers are cutting into the role that radio used to occupy, music consumption is diversifying in two somewhat oppositional ways: towards niche and independent music forms that probably wouldn’t have received commercial airplay in a previous era; and towards catalog recordings which may have been de-emphasized on commercial radio but which are a large part of the celestial jukebox in the cloud.

To put it simply, releases have a lot more to compete with these days. Many artists and labels continue to be dumbfounded by the silence their new releases receive. The quantity and pace of releases change how to approach marketing a release and how consumers interact with a release.

Shift 3: Music is Competing with Everything Now

In a previous era, music occupied a unique space in society. It was a distinct form of entertainment and experience that engaged the senses unlike anything else. With the explosion of a huge diversity of video game platforms, social networking as always-on entertainment, easy access to a huge quantity of television, film, user-generated videos, and even the flowering of podcasts, music is also competing with everything now. Once someone turns on their computer or pulls out their smartphone, they might not even be thinking in terms of “I want to listen to music.” Music lives in the same online stores as all these other experiences competing for attention.

The shift from physical product to MP3s to streams is probably the most talked about change of the music industry. Not only is music being carried to fans in a new format, the new format creates a different experience for the fan. For those music fans that have made the leap to a monthly subscription, music purchasing feels more like a utility than a discretionary entertainment purchase.

Discovery reaches new levels because there are no incremental charges for streaming an unknown or newly discovered artist.

How we think about introducing a new artist or recording to potential fans changes significantly as the balance shifts further to an online access model of music consumption.

And of course this tectonic shift has drastically impacted how money flows to artists, songwriters, rights holders, publishers, and labels. There is an emerging narrative that streaming services are cutting into physical recording sales revenues or even cheating artists, but that narrative does not usually account for: artist/songwriter agreements with labels; broader shifts away from buying physical recordings (regardless of whether legal streaming exists); the time it takes for a new format to gain traction; and, the fact that consumers regularly purchased physical albums at full price even though they only wanted a couple of songs.

Furthermore, there is the possibility that certain players in the music industry may lose market share precisely because of more equitable and transparent payouts, and because a large number of artists are getting paid than in the previous era. More and more artists are adding in direct-to-fan revenue streams, which cuts out record labels, distributors, and retailers. The comparison conversation may need to shift from gross revenue for the industry to net profit for the artist.

It will likely take a few more years before we can tell if the subscription model can grow the industry’s net profit and for which roles in the industry. But artists and companies that ignore this new reality will struggle to get traction.

Shift 5: Music Has Been Sliced into Smaller and Smaller Pieces

We went from albums to singles to compressed digital. Samples were introduced in the era of tape and vinyl, and now there are services for licensing stem tracks of songs, so that music directors of film and television can arrange songs to fit their scripts and scenes. Karaoke apps allow users to engage with music with their own vocals. There are digital instruments and apps emerging that allow fans to tweak each stem and create a new song on the fly. It’s easier than ever to slice and dice music.

Lyrics are used and monetized separately from the melody. Band photos and biographies are now commodities for sale, piped into web platforms and phone apps. Marketplaces are emerging that allow for pre-cleared licenses while tracking and paying the variety of composers according to their ownership split, even if the splits are different from country to country. Apps allow vocalists to license beats and it doesn’t matter if the vocalist is considered a fan or a professional.

Record labels, publishers, and artists are now able to slice musical elements, ownership, and royalties horizontally or vertically across a single track. As musical elements and rights become more granular thanks to our culture of digitization, new thoughts and systems are emerging about how rights and licenses are managed, permitted, and monetized.

On a side note about this granularization of music, since fans no longer need to invest in an entire album, singles are so ubiquitous that we don’t even talk about them any more. Every track on a streaming service is a single. Albums get sliced into singles that go onto “compilations” (a.k.a. playlists) created by fans and brands. Songs get strung together in hundred-song sequences. Sequencing, a role once held by record producers and radio DJs, has been sliced so that anyone holds the key to a great set. This was also done in the era of the original mixtape, but now it’s as simple as a dragging and dropping with your thumb on a phone.

Shift 6: Music as an Experience

Over the last decade, as we’ve increasingly become sucked into our interconnected-yet-physically-isolated digital bubbles, the pendulum has simultaneously swung in another direction: people yearn for experiences.

This includes simulated experiences like playing virtual rock guitar or dancing in front of videogame screen. Virtual reality will take this to a deeper level, allowing you to experience a multi-sensory live concert from your living room, allowing you to perform with a long-dead musical hero, or enabling a deeper collaboration with a musical friend thousands of miles way.

I argue that the resurgence in vinyl sales in recent years is also related to people wanting to have a real-life experience talking to other music fans, holding paper and cardboard, and putting the needle on a record and experiencing sound waves that might crackle depending on the air they are breathing.

The live music scene has grown significantly in recent years, with an explosion of festivals and tours. Festival culture is becoming more and more mainstream and creates an opportunity to balance out some of the revenue lost during the transition from physical to digital music. Bands have been experimenting with VIP packages, merchandise, and other types of experiences to help fans get a more robust in real life musical experience, alongside greater revenue streams.

Even crowd-funding platforms have created a new type of “fan as producer” experience that wasn’t available before the Experience Economy.

Whether operating online or in real life, artists and companies will benefit from creating experiences over transactions.

For several years, members of the music industry have been looking for the new formula for what it takes to be successful in the emerging music market. We are at a turning point in which there is a growing consensus that there is no single formula for success; there are many paths. This is not simply the result of a transitional phase in which we will have a new normal – at which point “the formula” will reveal itself. Instead, I believe the new normal is that the patterns and structures of music creation, distribution, promotion, and enjoyment will forever more be in a rapid pace of flux. Stay tuned for additional music tectonics.

Dmitri Vietze is the founder and CEO of rock paper scissors, a music and tech public relations firm.