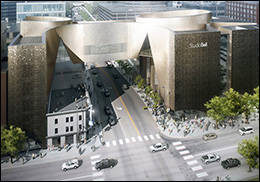 "There's never been a place in this country where you can come and learn about Canada's music on the international stage," Music Centre CEO Andrew Mosker told the Calgary Eye-Opener.

Located in the Studio Bell building, the National Music Centre features artifacts and historical memorabilia drawn from Canada's rich musical history, such as one of Neil Peart's drum kits, costumes worn by Canadian music icons and a mobile recording unit used by The Stones.

But it's not just a stuffy museum. Many of Centre's exhibits are interactive, such as electronically guided hands-on introductions to different musical instruments such as the bass guitar, or keyboard.

The Studio Bell building will also feature performance spaces, with support for both live music events from both internationally recognized and local artists, as well as professional caliber recording studios. The building itself as been designed with music in mind, and has been designed to replicate elements of an instrument, creating a unique aural space.

"Just think about the recording opportunities for artists like Daniel Lanois or Brian Eno or Arcade Fire, to come here and record … and use this equipment to build new sounds for future projects and what kind of impact it will be for Calgary to have those artists … touring through here and spending time here," Mosker told the paper. – Staff Writers