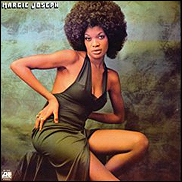 LOS ANGELES (CelebrityAccess MediaWire) — Margie Joseph may not have soared to the commercial heights of her Atlantic label-mate Aretha Franklin. But in the ‘70s, she released six albums that bore numerous R&B hits. She also attracted some hit producers — Arif Mardin, Lamont Dozier and Johnny Bristol among them — as well as some of the hottest writers and session musicians around. Mississippi-born Joseph was influenced by Sarah Vaughan, Billie Holiday, Ella Fitzgerald and Patsy Cline, along with the gospel music she heard in church.

In the mid-‘60s, Joseph met New Orleans DJ Larry McKinley, who took her to OKeh Records. She began her recording career there with two singles in 1967-68 written by Willie Tee, George Davis and Lee Diamond. She then went to Stax’s Volt label where she recorded two LPs in 1970-71. In 1971, it was off to Atlantic, a label she would call home for the duration of six albums. “One thing Atlantic did is they invested in me,” she says. “I don’t have any bad things to say about Atlantic. Atlantic treated me royally.” Those six albums will be reissued on March 11, 2008 by Collectors’ Choice Music, with comprehensive liner notes by Chicago musicologist Bill Dahl that include quotes from Joseph, McKinley, and Lamont Dozier.

Margie Joseph may not have tipped the top of the music charts back in the sixties and seventies but she enjoyed mild commercial success and also recorded her version of chart toppers such as Al Green’s “Let’s Stay Together”. The six albums being released will contain both her original material and her version of the songs that are a part of our culture of the pop of their time & are today's classics. –by CelebrityAccess Staff Writers