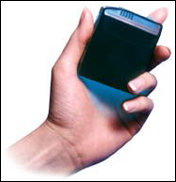 The device is designed to measure radio audience size among individuals in 10 different sample markets around the US, including New York and parts of New Jersey. The device, approximately the size of a pager, automatically keeps track of radio stations that an participating individual is tuned in to.

Cuomo and Milgram have taken issue with how Arbitron selects people to provide with a people meter as the company only chooses people with land-lines rather than cell phones. The two AGs filed suit contending that the metrics produced by the device are flawed and create a misrepresntation of radio demographics by underreporting minority households which more frequently, rely on just a cell phone instead of a traditional land line.

The suits seek to force Arbitron to stop commercial use of the device until they have addressed these percieved systemic flaws and for the company to pay restitution to minority broadcasters who Cuomo and Milgram contend have been most impacted by the misrepresentation.

The devices were intended to replace the old paper diaries that sample subjects use to keep to record the radio stations they listen to. The diaries were inaccurate and time-consuming to process and The People Meters were designed to replace these diaries, automating the process and ostensibly allowing for more accurate results. However, since the devices came online, Arbitron has been reporting significantly lower than expected listenership for stations popular with minority demographics which has led to concordant declines in advertising revenue.

In one case, New York's Spanish Broadcasting System found Arbitron ratings to be as much as 60% below what had been expected for their two highly-rated stations WSKQ Mega 97.9 and WPAT Amor 93.1. SBS's market maanger Frank Flores believes that the ratings Arbitron reports are inaccurate and have impacted their bottom line. "We believe that they need larger sample sizes," Flores told the Wall Street Journal.

Arbitron has refuted the allegations and noted that it has been working on perfecting the device in collaboration with the radio industry for years. They also claim that in many cases, they have met or exceeded minority participation goals for minority participation, including African-Americans and Hispanics in the New York Market. The device also has the support of many of the broadcasting giants such as CBS Radio. Arbitron has filed a suit against both the New York and New Jersey AG's offices, alleging that that the offices had violated their right to commercial free speech.