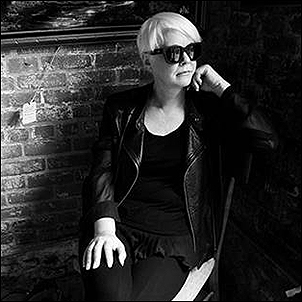 CHANGE is available now for pre-order at all digital music retailers as well as via a PledgeMusic Campaign. CHANGE marks an important milestone for Cindy Wilson: her first solo effort during a 40-year career with the legendary B-52s. Wilson feels that this project allowed her to be free to experiment with genre and sound in a new way, and she wanted to include her fans in this process by launching an exclusive campaign with PledgeMusic. Here, Cindy's many loyal fans will have access to things no one else can get: from exclusive signed colored vinyl LPs to having Cindy cook you dinner or take you on a personal tour of Athens, GA, Pledgers will be involved in a unique experience – a journey that the band will take with them.

Known the world over as a vocalist, songwriter, and founding member of the one and only B-52s, Wilson is heralding CHANGE with a captivating multimedia concert tour. North American live dates are currently scheduled through September; additional dates will be announced soon.

CHANGE began for Wilson nearly a decade ago upon her part-time return to her hometown of Athens, GA. She first encountered local multi-instrumentalist Ryan Monahan and drummer Leumuel Hayes when their Beatles tribute band was hired to play her son's birthday party. Wilson, Monahan and Hayes began teaming up for gigs, performing classic garage and psychedelic covers, before ultimately hitting the studio to create new music all their own. Athens-based producer/musician Suny Lyons was soon enlisted to join the group, resulting in the SUNRISE and SUPERNATURAL EPs, acclaimed by PopMatters for possessing "an undeniable sense of adventure."

Produced by Lyons at The Space Station in Athens, CHANGE is as bold as anything in Wilson's groundbreaking four decade canon, melding future pop, disco drama, American standards, electronica, and more into her own distinctive creative vision. New songs like "Mystic" and the transformative title track are intricate and inventive, lush and luminous with strings, synthesizers, harmonies, and Wilson's utterly distinct vocal magic. Further highlights include a pair of unexpected covers: New Colony Six's soft rock classic, "Things I'd Like to Say," and "Brother," written and originally performed by Athens' own beloved Oh-OK. With CHANGE, Cindy Wilson has once again remade pop in her own innovative, irresistible image.