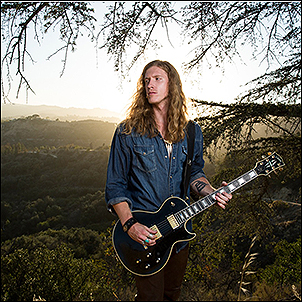 (CelebrityAccess) – Acclaimed blues power guitarist, singer and songwriter Jared James Nichols released "Last Chance," his new edgy, rocking single co-produced by Nichols and Tony Perry–son of Aerosmith's Joe Perry–and mixed by Jay Ruston (Anthrax, Stone Sour, Steel Panther) on Friday, June 16. Nichols has recently been performing in the U.K. with a subsequent U.S. tour in fall. The Los Angeles-based artist's itinerary is a mix of headlining dates, festival appearances at Hellfest, Ramblin' Man and Steelhouse in U.K. and an opening slot for Blue Oyster Cult, UFO and Saxon in the U.K and U.S.

"Last Chance" is a more aggressive, in your face style song compared to Nichols' debut release found on 2016's Old Glory & The Wild Revival that, early on, found James Woods of GuitarWorld.com raving, "being a great blues guitar player is something you can't teach or absorb through osmosis. Real blues comes from the soul. You've either got it or you don't. In the case of Jared James Nichols, the former applies" (11/12/13).

Now with "Last Chance," Nichols and Perry adventured to push the sonic limits. His second full-length album, Black Magic, is due out September 2017 (exact date TBA), but look out for a series of singles to be leaked this summer to coincide with tour dates. Fans can now purchase and stream "Last Chance" via all digital platforms.

Nichols told Loudwire.com, which exclusively premiered the song's lyric video this past Friday (6/16), "I wrote 'Last Chance' with the intent of leaving a scar! I love the power and fire in 70's rock like SABBATH and DEEP PURPLE. I wanted that energy in this track. Between the crazy guitar solo and the relentless groove, I went completely wild and just let it all hang out. Working with Tony Perry added an extra edge to the track. He has an ear and feel for shaping this kind of sound. It's a liberating feeling to work with someone who, like myself, isn't afraid to 'push' the equipment and limits while recording. We were definitely getting a little reckless and having a blast. You can tell…it directly transfers into the recording."

Onstage, Nichols' music and skillset truly comes to life with his power trio rounded out by the Swedish-born rhythm section of Eriik Sandin (bass) & Dennis Holm (drums). JARED's presence becomes amplified with guitar in hand. Audiences have experienced that everywhere from his performances at NAMM and SXSW to tours supporting Lynyrd Skynyrd, Zakk Wylde, Walter Trout and Glenn Hughes of Deep Purple fame.

In 2016, Jared James Nichols was featured in a mini-documentary feature series called "Uncharted" sponsored by Honda through Uproxx.com. After just two weeks the clip had been streamed over four million times and led to two festival bookings at The StoneFree Festival at London's 02 Arena and Azkena Rock Festival in Spain. He has also been featured in numerous YouTube videos including hosting the vintage guitar show "Fretted Americana" which have already generated 150,000+ views. For the show, Nichols was recently invited to play one of Eddie Van Halen's 1986 Kramer "Stryper" guitars.

Nichols continues to trek across the globe in 2017 supporting a U.S. tour with UFO and Saxon in March through April before heading to Europe in the summer for festival dates at Hellfest in France (supporting Aerosmith), Ramblin' Man Festival in England and Steelfest in Wales. Then he will return to the U.S. in the Fall supporting UFO and Saxon from September 22 through October 15.