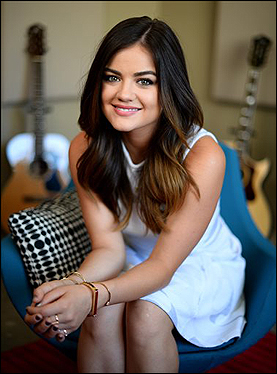 BURBANK, Calif. (AP) — Lucy Hale's fans may be clamoring to know whom she's singing about in her upbeat "Kiss Me" or her breakup anthem "Goodbye Gone," but the 24-year-old actress isn't spilling all her secrets in her debut album.

"I'll never reveal what it's about," said Hale, who says she's enjoying the speculation. "I mean some of it is a little bit obvious, at least obvious to the people that know me the best."

The Memphis, Tennessee, native described her pop-country album, "Road Between," out Tuesday, as "modernized Shania (Twain)."

In a recent interview, she said singing feels more scary and vulnerable than acting, but in the end, she found the two-year recording process therapeutic.

"The biggest breakthrough you have to make is to be willing to go to those places and to be open about it," she said. "Throughout the whole process I realized, 'Wow I really bottle emotions. Like this is good to sing about it. Yeah, scream it!'"

Hale wanted to be hands-on with the project, so she learned to play guitar and tried her hand at songwriting. She co-wrote one track, "Just Another Song," and made sure she felt a personal connection to rest.

"It's all stuff that I've gone through. I knew that if I'm singing someone else's words it has to be 100 percent something that I felt before."

Hale will fulfill another dream when she performs June 21 at the Grand Ole Opry in Nashville, Tennessee. She had to cancel an earlier performance due to illness.

Hale said her first love has always been music, and she hopes to continue juggling singing and acting like one of her idols, Tim McGraw.

"I love what he's done," she said. "He's still selling out arenas, but he's doing great movies like 'The Blindside' and 'Country Strong,' and he's got a beautiful wife and kids and has all these beautiful homes. So if I could like somehow find a small percentage of what he's done that would be cool."