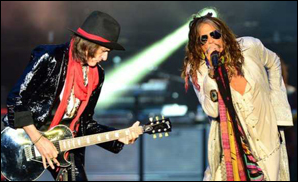 The band, who last headlined the rock event in 2010, played hits spanning their 41-year career during a set that lasted nearly two hours.

Before their performance, the arena`s big screens showed the Boston group getting ready in their dressing rooms backstage and then walking to the back of the main stage.

Alter Bridge played to a big crowd before them with The Pretty Reckless scheduled at the same time on the second stage.

Ahead of their set, which included Make Me Wanna Die, Miss Nothing and Heaven Knows, lead singer Taylor Momsen told Newsbeat that playing in a good slot at Download was a privilege.

"It does not suck to get to play later in the evening," she said a day after playing a set at the Isle of Wight Festival.

"I`m quite enjoying the gloom. Gloom and rock `n` roll go quite well together. It`s much better than the sunlight."

Steel Panther entertained the crowd with their usual antics and invited a group of girls on the stage for their final few songs.

Other acts to perform on the final day included Volbeat, Joe Bonamassa, Trivium, Phil Anselmo, The Dillinger Escape Plan, The Used and Crazytown.

Black Stone Cherry made a surprise appearance and Bon Jovi guitarist Richie Sambora played a solo set with Australian guitarist Orianthi, closing with a rendition of Wanted Dead Or Alive.

She told Newsbeat after their set that she and Sambora were working on a joint project.

"I met Richie [Sambora] in Maui," she revaled. "We were out there doing a charity show with Alice Cooper and we started writing songs.

"We wrote about 30 songs, so we`re making a collaboration album together which should come out next year."

The dates for next year`s festival have been announced as 13, 14 and 15 June.

"I`m already talking to potential headliners," he told Newsbeat. "We`re quite a way down the line on that.

"Interestingly enough, I`m already speaking to, and I`ve got offers out on, a couple of headliners for 2016.

"We`re way, way ahead of schedule. Nothing`s locked in yet but we`re pretty close."