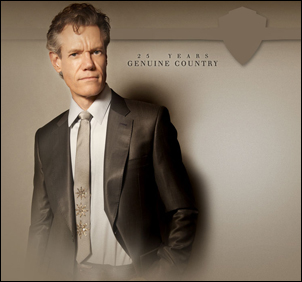 NASHVILLE, TN (CelebrityAccess MediaWire) — Randy Bruce Traywick was the second of six children. His father Harold, raised turkeys, bred horses, and ran a construction business, and his mother Bobbie, worked in a textile plant. Randy's father always wanted him to become a country singer, filling the house with the sounds of Hank Williams and Stonewall Jackson albums. Harold bought his four sons western outfits and guitars, and promoted them locally as the Traywick Brothers. By the time Randy was ten years old, he and his brother, Ricky, had their own duo, playing throughout the South at fiddler's conventions, private parties, VFW halls and anywhere and everywhere they could draw a crowd. Even at his young age Randy's voice startled people with its resonance. He dropped out of school in the ninth grade, and after that-fast cars, drinking and drugs lead to a series of scrapes with the law.


Fortunately a move to Nashville and his job at The Nashville Palace; where Randy worked cooking catfish and washing dishes, as well as singing on stage helped turn things around. It wasn't long before he had developed a following there as well, changing his stage name to Randy Ray. The exposure lead to appearances on Nashville Now and Nashville After Hours. His Nashville popularity grew by increasing word-of-mouth as people touted him as an outstanding newcomer. In 1983 while performing at the club, Randy recorded his first album independently and called it, "Randy Ray-Live at the Nashville Palace." The album was mostly sold at the club between shows and is now a collector's item and out of circulation.


Turned down by nearly every record label in Nashville, often more than once, Randy was finally signed to Warner Brothers Records in 1985. Record company executives changed his name to Travis, and Randy's first recorded effort for his new label was "Prairie Rose," on the soundtrack to the film, "Rustler's Rhapsody." It was followed by the release of the album, "Storms of Life" in 1986, and the rest is country music history. The first single, "On the Other Hand," was a perfect slice of Randy's authentic country talent. "1982" followed, and with that hit, Randy established himself as a singer and performer in the grand tradition of George Jones, Lefty Frizell, Merle Haggard and a handful of others. The success of both singles led to wide-spread demand for live shows, and Randy next set out on an extensive and ongoing tour, taking him across the United States and Canada before record-setting crowds.


Soon it seemed every award in the music business had Randy's name on it. A string of country chart-toppers ensued, and by the end of the decade, Randy's record sales topped 13 million copies. During a break from touring in 1991, Randy married his longtime manager and friend, Lib Hatcher in a quiet ceremony on the island of Maui, Hawaii.


In September, 1997, after twelve albums with Warner Brothers, Randy was the first artist to sign with the newly formed DreamWorks Records label in Nashville. When "Out of My Bones," the first single from the new label's debut album, "You and You Alone" was released in 1998, he delivered the label its first number one country hit. "A Man Ain't Made of Stone," Randy's second album for DreamWorks, continues his journey as one of the biggest selling, and most distinctive artists in country music. His latest album a celebration of 25 years of music features many of his hits in duets with a menagerie of country music stars. Travis is currently on tour in support of his latest album, which was released last year.