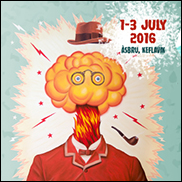 KEFLAVIK, Iceland (VIP NEWS) — The organizers behind All Tomorrow’s Parties are facing yet another potential crisis following reports that several of the bands booked to play its forthcoming ATP Iceland festival have pulled out.

The British promoters have had a calamitous year so far, with a Drive Like Jehu-curated event that was scheduled to take place in North Wales in April cancelled several days before it was due to begin.

Now ATP Iceland, scheduled to take place in Keflavík on the first weekend of July, appears under threat of cancellation, following confirmation that several acts have withdrawn amid claims of contractual disputes.

Yesterday, Italian film composer Fabio Frizzi tweeted that he would not be appearing at the festival because “ATP haven`t honored any agreements or contracts agreed with band or management.”

Further tweets announced that “the “lack of communication” and “failure to honor any of the agreements that we made with [ATP chief] Barry Hogan, made it impossible for us to perform.”

Frizzi’s withdrawal followed similar statements from several other acts booked to play. Last month Icelandic band Mum announced, “with great regret,” that they would not be performing.

“Unfortunately the terms of the agreement with the festival have not been honored and the band has been left with no other option than to pull out of the line-up,” read a statement on its Facebook page.

Blanck Mass, led by Fuck Buttons’ Benjamin John Power, also recused himself from the festival last month (May 19), although he did not explain his reasons why. "I hate to let anyone down, particularly people who have bought tickets to see me but it’s just not possible to be able to play this event,” Power wrote on Facebook.

April`s Drive Like Jehu-curated events were scheduled for two weekends at Pontins holiday camp in Prestatyn. The first, which was curated by comedian Stewart Lee, did go ahead as planned, but without John Cale, who pulled out of his headline appearance on both weekend’s saying that its “organizers had let us all down.”

The second event suffered a worse fate, cancelled entirely following weeks of confusion and conflicting messages over where it would be staged. After insisting that it would be going ahead as advertised, organizers switched venues to Manchester’s Victoria Warehouse, located approximately 65 miles from Prestatyn, before throwing in the towel on Apr. 18 due to a “lack of financial viability.”

ATP did not respond to requests to comment on the Keflavik situation, nor is there any mention of the line-up changes on the ATP website, Twitter account (last updated in April) or Facebook page. The latter does, however, include several exchanges between organizers and customers still awaiting refunds for tickets purchased for April’s cancelled Drive Like Jehu event.

In 2014, ATP`s London-based Jabberwocky festival — featuring Neutral Milk Hotel, James Blake, Caribou and Kurt Vile — was axed three days before it was scheduled to begin. At the time, organizers blamed the cancelation on a “succession of events that have lost money in an increasingly aggressive festival market.”

Two years prior, ATP Concerts Limited was placed in voluntary liquidation transferring all its assets, including the rights to the All Tomorrow`s Parties festival, label, and shows, to a new company called Willwal Limited. 2012 also saw organizers fall into dispute with the Butlins holiday camp chain, bringing an end to a six-year partnership. –According to Billboard