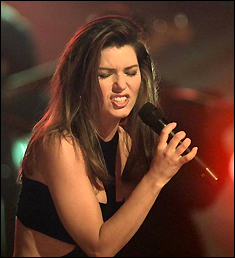 Artist of the Year:
Jim Lauderdale

Song of the Year:
"She's Looking At Me," Jim Lauderdale & Ralph Stanley & The Clinch Mountain Boys

Instrumentalist of the Year:
Jerry Douglas

NASHVILLE, Tenn. (AP) — The notion that something has gone wrong with country music got heavyweight support this weekend from Johnny Cash and Emmylou Harris.

Both were honored Friday night at the Americana Awards Show, and each made it clear they feel more at home on the margins of the industry — where they feel its real heart is.

The Americana Music Association's first awards show promoted a rawer, less flashy version of country than the music of Shania Twain and other mainstream Nashville stars.

The highlight of the night was a rare appearance by the 70-year-old Cash, who has had health setbacks in recent years including diabetes and bouts of pneumonia and bronchitis.

He was honored with the Spirit of Americana Free Speech Award, for "shining a light on issues that otherwise go unseen."

Cash recited a patriotic poem, "That Ragged Old Flag," and performed with his wife, June Carter Cash. At first frail, he seemed to gain strength from performing again.

"Thank you very much, folks," Cash said during one of three long standing ovations.

The Hives, Bjork Finalists for Prize

NEW YORK (AP) — Bjork, N.E.R.D., Cee-Lo and the Hives are among the 10 finalists for this year's Shortlist Prize, which celebrates acclaimed artists whose work has yet to reach widespread commercial success.

Other finalists for the award, to be presented Oct. 29 in Los Angeles, are Aphex Twin, the Avalanches, DJ Shadow, Doves, the Flaming Lips and Zero 7.

"The Shortlist honors creative achievement across all genres of music, from the energetic punk of the Hives to the late-night grooves of Zero 7," said co-founder Tom Sarig in a statement.

"This year's panel of (judges) was inspired by all sorts of experimentation, from the layered guitar soundscapes of the Flaming Lips to the lyrical diversity of rapper Cee-Lo, who is opening new doors for personal expression in hip-hop."

N.E.R.D., which fuses hip-hop, rock and funk, is a side project of hit producers Pharrell Williams and Chad Hugo, otherwise known as the Neptunes. They were among the panel of Shortlist judges, but since N.E.R.D. is among the finalists, they have been removed.

"We had such a good time last year that we thought we'd do it again this year," says Styx lead singer Tommy Shaw, who conceived the idea for last year's Volunteers For America concerts in Atlanta and Dallas. "It was an extremely emotional yet rewarding experience for all of us involved and we're looking forward to this year's Rock To The Rescue concerts."

Proceeds from the show at the Continental Airlines Arena – which is being produced in association with Metropolitan Entertainment – will benefit the Port Authority Police World Trade Disaster Survivors Fund while the show at the Gund Arena will benefit that fund as well as the Rock and Roll Hall of Fame Educational Fund.

"Last year's concerts raised $550,000 for the Port Authority Police Department and $25,000 to a few families close to our hearts that were affected by the events of 9/11," states Charlie Brusco of TBA Entertainment. "That was definitely a good start but our mission is to continue the fundraising efforts for the families of the victims of the September 11 tragedy."

REO Speedwagon's Kevin Cronin states, "A year has passed since the horrific events of last September 11th, and I still cannot fully integrate it into my life's experiences. I've watched the various televised retrospectives, and they're so powerfully real that they have a way of overwhelming me. No matter how many times I see those images, there is a part of me that is as shocked and angry and sad as I was a year ago. The feelings have not faded… Maybe they never will… The Rock To The Rescue benefit concerts will let the people of New York and New Jersey and all around the country know that we have not forgotten."

Fitzgerald-Hartley To Be Honored By IEBA

At the International Entertainment Buyers Association's Founders Award Dinner on October 8, managers Larry Fitzgerald and
Mark Hartley of The Fitzgerald Hartley Co. will be recognized for their 25 years of
service to the industry.

Since founding the company in April 1977 as a management firm,
the company has branched out into other areas such as music publishing and
administration, marketing, music supervision for film, touring and consulting.

Comedian Bill Engvall will host this year's awards dinner. Other awards to be given include: Johnny Cash, who will receive the Pioneer Award and Jeff Foxworthy, recipient
of the Humanitarian Award.