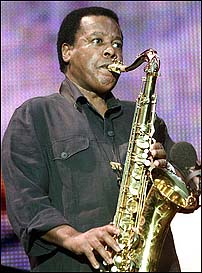 States JJA President Howard Mandel, "The JJA awards continues to grow and this year is our largest celebration of music and its documentation yet. Over the past seven years we¹ve recognized the contributions from numerous musicians, journalists, jazz business and community figures, and this year the JJA broke new ground by hosting simultaneous awards programs in Israel and across the U.S., something no other genre-based music awards has done. Our events bring together players, writers, broadcasters, photographers and health care providers ­ all of whom need each other."

3. Up 'n' Coming Musician of the Year Winner: Jason Moran

U2 Voted Best Live Act By Readers of Rolling Stone

(CelebrityAccess News Service) — The readers of Rolling Stone have voted U2 the best live act in the world. Rolling Stone asked its readers to vote by e-mail for the best live artist with the stipulation that the artist toured within the past two years. They got more than 28,000 responses.

Comedian Chris Rock will once again serve as host for the August 28 event at Radio City Music Hall, where the awards show debuted in 1984.

Nominees, performers and presenters will be announced at a later time. — By Jane Cohen and Bob Grossweiner.