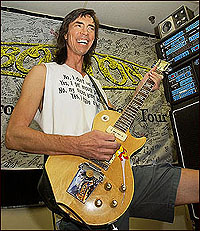 (CelebrityAccess News Service) — Tom Scholz, founder and frontman of the group Boston, filed a lawsuit on June 24 in the Supreme Court of the State of New York against its label, Artemis Records. The lawsuit seeks ''no less than $1 million'' in damages for an alleged failure to promote its latest album, Corporate America, as promised, reports The Boston Globe. According to the lawsuit, Scholz calls Artemis ''a virtual record company concerned only with promoting itself as opposed to the artists it prominently features on its website.''

The paper reports that in the lawsuit, Scholz accuses Artemis co-owner Danny Goldberg of ''promising to properly promote the band and its music and then failing to do so; choosing an arbitrary release date based on a promised marketing plan and then abandoning that plan; inadequately staffing the team necessary to promote and market the band's work; concealing information from the band; failing to properly account for and pay royalties; and repeatedly placing their interests above the band's.''

Artemis spokesperson Michael Krumper, told the paper, ''We haven't seen the lawsuit yet, so we can't comment on it." — edited by Jane Cohen and Bob Grossweiner

NEW YORK (AP) — A former business partner is suing Sean "P. Diddy" Combs, claiming the rapper threatened him with a baseball bat in 1996 and cheated him out of $25 million.

Kirk Burrowes claims Combs used the bat threat to force him to sign over a 25 percent stake in Bad Boy Entertainment, Combs' music conglomerate. Burrowes claims he was wrongly fired as president of the company.

"Kirk just wants Sean to realize the value he had in making Sean what he is today and to do the right thing," John Bostany, Burrowes' lawyer, told the Daily News for Tuesday editions.

A spokesman for Combs told the Daily News the $25 million lawsuit was an "absolute fantasy" and said Burrowes was simply a fired employee looking to cash in.

The suit, filed in Manhattan federal court, also names Bad Boy Entertainment and Kenneth Meiselas, a lawyer for the conglomerate, as defendants.

LOS ANGELES (AP) — A lawyer for Marion "Suge" Knight said Wednesday that she has statements from eight witnesses that the rap mogul did not punch a parking valet, an incident that could return him to prison.

"Unfortunately for Mr. Knight, it appears that he was arrested prior to a full investigation of the allegation," attorney Rose Kogeman said at a news conference Wednesday.

Kogeman said it was another patron, whom she did not identify, who got angry and shoved the valet while waiting for a vehicle.

Knight, 37, was arrested last month for allegedly punching the attendant. Parole officials say they will ask the California Board of Prison Terms to determine if Knight violated conditions of his parole. Revocation of parole could lead to as much as a one-year prison term, officials say.

The witness statements will be considered during an as yet unscheduled administrative hearing when Knight will have a chance to offer his defense, officials said.

Russ Heimerich, a spokesman for the Department of Corrections, said being taken into custody for a suspected parole violation is different than a regular arrest because parolees are technically still in the custody of the state.

"If we have reasonable suspicions that someone has violated parole, we'll take then back into custody and let the Board of Prison Terms adjudicate," he said.

Knight, who founded Death Row Records, was convicted in 1992 of assault and weapons violations and was placed on probation. In 1996, he was jailed for five years for violating probation after he and several associates, including rap star Tupac Shakur, were recorded on videotape beating a gang rival in the lobby of a Las Vegas hotel. Shakur was later fatally shot in Las Vegas.

Knight spent 61 days in jail earlier this year after authorities found that he had associated with a known gang member in violation of his probation.

Also present at the news conference was Minister Tony Mohammad, western regional director of the Nation of Islam, who said he was with Knight the evening of the altercation and saw no physical contact between Knight and the valet.

BATON ROUGE, La. (AP) — Grammy-nominated rapper Mystikal pleaded guilty Thursday to charges that he forced his hairstylist to perform sex acts on him and two bodyguards.

Mystikal, whose real name is Michael Tyler, had been charged with aggravated rape, which carries a sentence of life in prison if convicted. He agreed to plead guilty to extortion and a sexual battery charge.

He was sentenced to five years probation for extortion and has a Sept. 25 sentencing date for the second charge, sexual battery of the infirmed.

Prosecutor Sue Bernie said Tyler confronted his hairdresser in his Baton Rouge apartment last July and accused her of stealing checks from him. Tyler told the woman he would not tell police about the checks if she did something "degrading" for him, Bernie said.

Tyler told her to perform oral sex on him and Leland "Pokie" Ellis, 37, and Vercy "V" Carter, 35, Bernie said. The men videotaped the sex acts, which Bernie said included intercourse.

Tyler's attorney, David Bourland, said his client did not agree with all the allegations, but agreed that sexual battery took place.

"I'm glad that it's getting behind me," the rapper said after his guilty plea.

Mystikal's record "Tarantula" was nominated for a best rap album Grammy in January.

LOS ANGELES (AP) — Jennifer Lopez has filed a petition with California's labor commission that accuses her former representative, Benny Medina, of failing to have a valid talent agent's license while managing her career.

The singer-actress fired Medina in June after five years of service.

While the state has different rules governing the activities of managers and talent agents, Lopez's attorney, Barry Hirsch, said Medina — who worked as her manager — inappropriately performed talent agent functions, such as negotiating deals for her upcoming film "Shall We Dance?" and a sponsorship agreement with L'Oreal cosmetics.

Medina told The Associated Press Wednesday that Lopez always had a talent agent while he worked with her and denied that his activities crossed over into that territory.

"This is a real display of lack of gratitude and appreciation for what other people do in the building of a career and at the same time it shows tremendous avarice and greed," he added.

The document filed Wednesday, which "Entertainment Tonight" first reported, seeks to invalidate all remaining partnerships between Medina and Lopez. It also said Lopez, 32, wants Medina to repay everything he earned while working for her, plus 10 percent interest.

Medina and his Handprint Entertainment company were set to receive 10 percent of her entertainment earnings — excluding music work, for which she would pay 15 percent, according to the document. She said she also agreed to pay 10 percent of other earnings, which included work in the fashion industry.

Seattle (AP) — RealNetworks Inc. is being sued for allegedly infringing on another company's patents with its music subscription service that allows users to find, personalize and play music over the Internet.

Friskit, based in San Francisco, filed suit in Chicago on Friday against RealNetworks, which develops audio and video software and runs its RealOne subscription service for Internet users. The suit also names San Francisco-based Listen.com, which is being acquired by RealNetworks and whose Rhapsody music service is being folded into RealNetworks' RealOne product.

Although neither company is using the actual technology developed by Friskit, Friskit's chief executive, George Aposporos, maintains the search, personalization and other features of their music services violate Friskit's patents.

Both RealNetworks and Listen.com brushed off the lawsuit as meritless.

"This appears to be the last gasp of a struggling company, commandeering the press in an amateur effort to extort an unwarranted settlement," Listen.com said in a statement. "We will have no further comment."