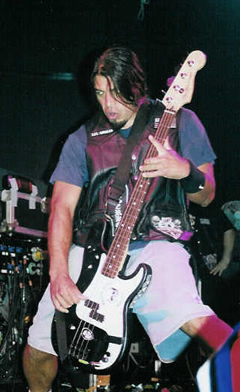 After a long search, Metallica has replaced bassist Jason Newsted, who left the
band in 2001. Rob Trujillo (Ozzy Osbourne, Suicidal Tendancies and Infectious
Grooves), is the new bassist; however, Bob Rock, who produced Metallica's
forthcoming album "St. Anger," due June 10 on Elektra Records, played bass on the
CD.

Trujillo will be on the road with Metallica during its North American "Summer
Sanitarian" tour with Limp Bizkit, Linkin Park, Deftones and Mudvayne. Metallica
lasted toured in 2000 with its "Summer Sanitarium" tour with Korn, Kid Rock and
others.

We've all known, and have been huge fans of Rob since the early '90s when he
was a part of the legendary Hardcore / Metal band Suicidal Tendencies," says the
band on its website. "We got to know Rob when we played together with Suicidal in
Europe 1993, during the 'Nowhere Else To Roam' tour. We were impressed by
Rob's roaring bass style and his very cool, unique vibe onstage, things we got to see
again during the '94' "Summer Shit" tour when Suicidal joined forces with us."

"My visions of Rob are when we did Summer Shit 94 Tour with Suicidal, and
Danzig," says James Hetfield. "I remember being blown away by the fierce-ness
and seeing Rob, as this monster on bass. He brings an awesome new strength to the
band, and makes us step up."

"We've taken a long time to find the right bass player for us. Obviously being a
good bass player is important (!!) but it was also very important that whoever we
found would fit in as a family member, a brother with a huge vibe. We wanted a
fourth band member, not just a new bass player," posts Metallica.

"I am very excited for Rob to be in the band and it feels like we are a new band,
yet again," says Kirk Hammett.

"When Rob came to San Francisco the first time and jammed with us, we all felt
this incredible magic between the four of us. It was just something that we could not
describe, we all just knew it. Bob Rock told us right after the jam, that it sounded like
a fucking 747 taking off!!" says the band.

"I am so fucking excited to be a full unit again," says Lars Ulrich. "The last two
years of just being the three of us have taught me so much about myself, about
James and Kirk and about Metallica. And to welcome Rob into Metallica in 2003
after all the growth and soul searching we've been through for the last two years,
feels so fucking awesome. Being at full strength again is at this moment
indescribable."