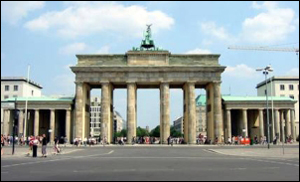 BERLIN (VIP NEWS) — According to a press release the city of Berlin will host the inaugural edition of Berlin Music Week in September 2010.


The event is supposedly set to take over from Popkomm, which had been set to take place this October in Berlin, but had been cancelled due, some say, to a lack of interest. Organizers had hoped to revive the event next year, but now it is said that it will be folded into this new event with substantial backing from the Berlin government. Organizers hope to see a significant endowment for the event from the national government as well.


The owners of PopKomm, Messe Berlin, are owned by the City, and have it appears been encouraged, possibly ordered (?) to cooperate in 2010 with all2gethernow, BerMuDa (Berlin Music Days), the Berlin Music Commission and others. Rob Berends, in Berlin for the Network Europe Daniel Barkowski will replace event director Katja Gross (née Bittner) who is now on her second maternity (Congratulations from all at VIP!).


Also Klaus Gropper, Patricia Schwan, Dirk Schade and earlier Constanze Althoff have left the team. As Rob says it seems that a lot has happened at PopKomm and Berlin Messe!


The press release also states that Berlin Music Week will include a music conference with Barcamp, a trade show format, individual events such as industry meetings and events organized by associations and networks, and public performance events such as an electronic music festival at venues around the city.


Organizers are planning an extensive national and international marketing effort and a number of organizations have signed on as partners, including the Berlin Music Commission, the Club Commission and the VUT (An indie label trade association) Labcom, Media Board, Popkomm Berlin organizers and clubs.


"Berlin enjoys an excellent worldwide reputation as a musical metropolis – and we intend to expand further. The brand Berlin Music Week is a crucial strategic Initiative for Berlin's music industry: It concentrates vitality and diversity of the industry." said Berlin Senator for Economics, Technology and Women (?) Harald Wolf in a statement.