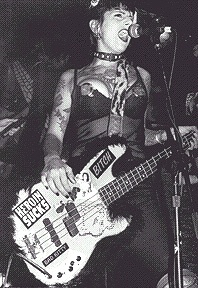 Bianca Halstead, 36, who fronted rock band Betty Blowtorch as Bianca Butthole, died December 15 in a car accident just outside New Orleans. According to reports, the speeding 1986 Corvette, driven by William McAllister, 33, spun out of control on Interstate 10 into oncoming traffic. It was estimated to be traveling at more than 100 mph. Trooper Todd Marchand told the AP that McAllister had apparently been drinking.

Earlier that evening, the group performed at the Howlin' Wolf in New Orleans with Nashville Pussy.

McAllister, who survived the wreck and underwent surgery over the weekend, will likely face criminal charges.